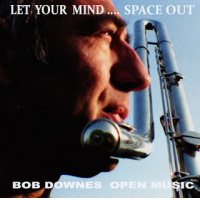 Any CD release by Bob Downes is a significant event but the psych-entitled Let Your Mind...Space Out is important because it also celebrates the 80th birthday of this virtuoso jazz multi-instrumentalist. It's hard to credit that Downes, like his contemporaries Mike Westbrook and Mike Gibbs has now achieved octogenarian status, given that his early oeuvre was populated by freewheeling jazz rock albums such as Electric City and Deep Down Heavy, both released in 1970.

But Downes also made a big impact in the free improvisation world. A frequent compatriot of his 1970s freer albums was Barry Guy now regarded as one of the world's great virtuoso bassists. Similarly, Downes recorded with the late free jazz drummer and innovator John Stevens. Albums such as the 1970 recording Diversions and 1972's Open Music both were important statements that combined extemporisation with composition. 1974's Episodes At 4am was an example of Downes's use of atmospherics and a variety of instruments to create music that was both abstract and mesmeric.

Let Your Mind...Space Out plays almost like a career retrospective but was actually recorded in a thermal bath (prior to opening time) in Germany in 1988. The natural echoey acoustics of the session are apparent from the opener "Let Your Mind Space Out," with Downes repeating the title phrase accompanied by contrabass flute. Downes manages to evince incredible spacey sounds from his instrument and this is repeated on the segued "Genie" where he employs eerie Eastern-influenced arpeggio runs.

"Thelonius" is a catchy multiphonic reworking of Monk's "Straight No Chaser" again performed on contrabass flute, which, incidentally, is a huge instrument measuring nearly two and a half metres in length. "On The Run" features a repeated theme with bass flute accompanying breathless, wordless vocals. Here Downes removed the foot joint of the instrument and inserted a champagne cork in the end of the flute body to make it sound lower in pitch than would otherwise naturally occur. The contrabass flute pads on "Predator," a track also heard on Downes's It's A Mystery, are employed to give a percussive effect accompanying the disquieting notes, and conjuring-up strong imagery of dangerous pursual.

Both "Land Of The Red Man" and "Chant" featuring contrabass flute and double-barrelled bass flute (parts of the bass and contrabass flutes assembled together) respectively, are both evocative of the music of the native American Indian. On the latter track, Downes has managed to produce an even lower bass note than either of the two flutes would produce independently. "Magdalena Jetelova" features a short head introduced on contrabass flute plus vocals repeating the title's name and ending with a feedback-like squeal. The breezy and bluesy "Feelin' Good" and "Going On A Journey," both played on contrabass flute, hark back to his earliest albums and revise memories of tracks that appeared on Electric City. It's doubtful that anyone else in jazz, other than perhaps the late Rahsaan Roland Kirk, has experimented so successfully with a variety of wind instruments to produce such truly novel and captivating music as clearly evidenced by Let Your Mind...Space Out.

Let Your Mind Space Out; Genie; Thelonious; On The Run; Predator; Land Of The Red Man; Magdalena Jetelova; Chant; Feelin' Good; Natural Being; Him Bin Go; Going On A Journey.