Taylor Eigsti: Let It Come To You 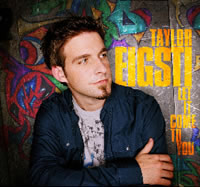 It's all true. Still only 23 years old, Eigsti is like a fresh wind blowing through in-the-tradition jazz. A virtuoso technician—a child prodigy, at age 12 he opened for singers Diana Krall and Al Jarreau—he's also an inventive bandleader and arranger who puts his line-ups together with imagination and then plays to his colleagues' strengths. Above all, he's an electrifying improviser, bursting with ideas and wholly free of cliche.

Let It Come To You is Eigsti's sixth album (he released his first in 1999) and his second for Concord, following Lucky To Be Me (Concord, 2006). Seven of the tracks are refreshed and recalibrated standards or new standards, from Cole Porter through Duke Ellington to Wayne Shorter and Pat Metheny, one is a rock cover (The Eels' "Not Ready Yet"), and four more are Eigsti originals.

Eigsti puts such a personal spin on standard material that he makes even the most familiar tune sound newborn. Juan Tizol and Ellington's "Caravan," taken at a furious pace with creative rhythmic departures, includes blinding solos from guitarist Julian Lage and Eigsti, who supplements his Paganini-like technical facility with DigiTech pedal effects and engages in a storming dialogue with drummer Eric Harland. Eigsti's facility is remarkable, but it's not the point of his music and he doesn't constantly foreground it. Here, however, it's just gobsmacking. At 9:22, "Caravan" never lets up.

Another track propelled by two teams of horses is Pat Metheny's "Timeline." Eigsti's arrangement features tenor saxophonist Joshua Redman in a tribute to the late saxophonist Michael Brecker, who recorded it on Time Is Of The Essence (Verve, 1999). Metheny himself performed the tune as a tribute to the ailing Brecker in 2005, with David Sanchez on tenor. Redman solos twice, starting hardboppish and becoming increasingly free. At 8:27, it's another extended rocket trip.

At other times, Eigsti gets deliciously dreamy. Antonio Carlos Jobim and Chico Buarque's "Portrait In Black And White" showcases Lage's weird and otherworldly guitar, sounding like something between a zither and harp. Eddie Cooley and John Davenport's "Fever" does feature a harp, a Colombian version of the instrument played in duet with the piano.

The originals include Eigsti's overdubbed "rhythm" piano, subtly employed. The three part "Fallback Suite" is played by an augmented line-up and draws much of its interest from Eigsti's layered arrangements for tenor saxophones and flutes, which have something in common with British reedplayer Finn Peters' writing on his wonderful Butterflies (Accidental Records, 2008).

There are many more delights. This is a monster of an album.