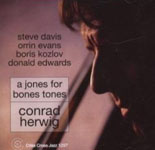 Easily one of the most technically brilliant jazz trombonists in the history of the music, Conrad Herwig continues to establish a superb catalog of releases that document him in a variety of settings and musical genres. From quartet dates to his Latin projects, the key ingredients to any of Herwig's endeavors are a desire to keep the music moving forward and his skills as a brilliant arranger and gifted composer. Such marks his latest Criss Cross Jazz side, A Jones for Bones Tones, his second two-trombone set shared with Steve Davis and a unique forum for original pieces that pay tribute to some of Herwig's key bone influences.

Utilizing friends from the Mingus Big Band, Herwig gains superb support from pianist Orrin Evans, bassist Boris Kozlov, and drummer Donald Edwards. Of course, there's much to be gained by the complementary styles of Herwig and Davis. While the former is clearly identifiable by his overt and filigreed approach, the latter is just as distinguished, with a more melodic style and burnished tone. The wide variety of material here makes for a delightfully enjoyable recital that is well paced and just the right length.

Based on hybrid Brazilian grooves are the two numbers "Eje's Dream" and "Raulzinho's Ride," the former piece written for Swedish trombonist Eje Thelin and the latter dedicated to Raul De Souza. Tapping the Afro-Cuban mood that Herwig greatly favors, "Que Viva Barry" references Barry Rogers, a key member of salsa legend Eddie Palmieri's ensembles in the '60s. "For Albert" is the ringer of the set, providing a showcase for Herwig's chops, while paying homage to avant-garde stylist Albert Mangelsdorff. The other pieces strike a balance between medium and up-tempo swingers with dedications to Frank Rosolino, Slide Hampton, J.J. Johnson, and Curtis Fuller.

Herwig has come up with the perfect way to honor the legacies of several of jazz music's most important trombone stylists and in a way that is fresh and original. He could have easily pulled tunes or standards associated with these men and engaged in a mere nostalgia trip. Instead, his own compositions speak to his individuality, but also recall some of the distinguishing qualities of each honoree. Herwig and Davis certainly sound like they're having fun with the material and drummer Donald Edwards proves to be an interesting new find for this reviewer, his creative comping and refined sound adding immensely to the overall fine results.