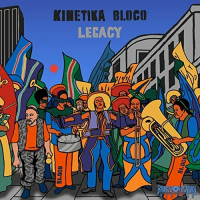 As you would anticipate, there is much great jazz to be heard on the album, and along the way it bears witness to community spirit and the power of music to do good. It was recorded to celebrate the achievements of the music charity Kinetika Bloco and its mission to get young Londoners engaged in long term creativity and realise their human potential, a program in which its eponymous big band plays a leading role. The project was launched in 2000 by the late and much loved Mat Fox, whose sons, saxophonist Ruben and trombonist Misha, are among the team carrying their father's work forward.

Kinetika Bloco is a big band. Most of the tracks on Legacy, which was recorded over two days in July 2021, are performed by a lineup of twenty musicians. All of them have passed through the programme at some point and most have returned to tutor newcomers. Along with the aforementioned luminaries, the members include emerging stars such as saxophonist Kaidi Akinnibi and trumpeter Ife Ogunjobi and who knows how many stars of the future. (For full personnel details see Additional Instrumentation below).

Aside from Duke Ellington and Juan Tizol's opener, "Caravan," which has been in the book since 2001, all the material was composed by past or present band members—Mat Fox, Ruben Fox, Claude Deppa, Mark Kavuma and drummer Emmanuel Franklyn Adelabu. The melodies and rhythms are drawn from diverse cultures, including from Africa, the Caribbean, Brazil and the United States. To describe the tracks in broad brushstrokes, the first three are in upbeat party mode, the middle four more reflective, and the closing two celebratory going on raucous. The whole shebang was produced by Kavuma for his own Banger Factory label.

Along with another grassroots music charity, Tomorrow's Warriors, founded by Gary Crosby and Janine Irons in 1991, Kinetika Bloco is responsible for much of the vigour of the 2022 London jazz scene and the feeling of togetherness which runs through it. When Mat Fox passed in 2014, over six hundred people came to his funeral and he was played out by the band. It is almost always unwise to attribute opinions to people who are no longer with us, but it can safely be said that Fox would love Legacy. And the rest of us can be grateful for the legacy he left. Check the YouTube below for a taste.