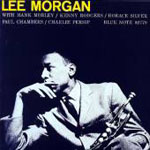 Were it not for the mature and ceaselessly lyrical contributions of tenor saxophonist Hank Mobley, this RVG remaster of an eponymous 1956 Lee Morgan date (subtitled, on the backside of the album, Volume 2: Sextet) would appeal only to Morgan completists. The trumpeter's early Blue Note recordings and meteoric rise have already been documented by a number of distinguished Morgan reissues—City Lights, The Cooker, Tom Cat, The Gigolo—coinciding with the 35th anniversary of the gifted player's premature, shocking end. Only after attending to these releases and the indispensable Sidewinder (1963) and Cornbread (1965) should a listener give some consideration to this early record of the trumpet star's development.

Lee Morgan is the second Blue Note date under the trumpeter's leadership, one of four featuring Morgan playing primarily Benny Golson songs and arrangements. After a tentative, cup-muted entrance on the first studio recording of Golson's "Whisper Not," Morgan comes up with a "Mulberry Bush" quote that gets him on track, briefly calling to mind Clifford Brown's legendary cup-muted solo on "September Song," from Sarah Vaughan (EmArcy 1954). Altoist Kenny Rodgers, a virtual tonal twin of Jackie McLean, follows with the first of several halting, faltering solo turns.

Not until it's Mobley's turn do the proceedings move into a smooth and steady gear, with the immediately identifiable, reassuring sound and fluid melodic ideas of the tenor giant practically stealing the show, save for the equally stellar and steady support of bassist Paul Chambers. Even pianist Horace Silver sounds bland, refraining from dropping the left-handed low-register bombs that usually distinguish his driving solo style.

With the exception of the opener, the tunes and arrangements quickly fade from memory. It's questionable whether the backup harmonies supplied by the remaining two horn players complement the player who's soloing, especially given the raw, slightly off-center intonation of Rodgers' alto. Though deserving credit for jump-starting Morgan's career, Golson too was learning his trade as an arranger, as becomes manifestly clear with the sterling settings he would supply for the later City Lights (1957).

Finally, the programming accounts for some of the lackluster effect of the session. The first five tunes are in a minor key (the adjacent "Latin Hangover" and "His Sister" both in F minor) and, with the exception of the ballad "Where Am I," fall into a similar medium-up tempo. The audio, moreover, is somewhat dead for a Van Gelder session (and a remastered one at that), with both Silver's piano and Persip's drums occasionally muffled in the mix.

Under the circumstances, Mobley's ability to get beneath the surface, extracting something vital and fresh from each song is all the more remarkable. There are still those who ignore or dismiss him for being so casual about the adjective in hard bop, but what he replaced it with is certainly no less aesthetically valid. As tempting as it is to pass off this session as representative of its time, it's hard to reconcile a recording such as this with one made nine months earlier—Art Blakey, The Jazz Messengers (Columbia 1956)—on which not just Mobley but Silver's songs and arrangements all but attain timeless perfection.

Whisper Not; Latin Hangover; His Sister; Slightly Hep; Where Am I; D's Fink.