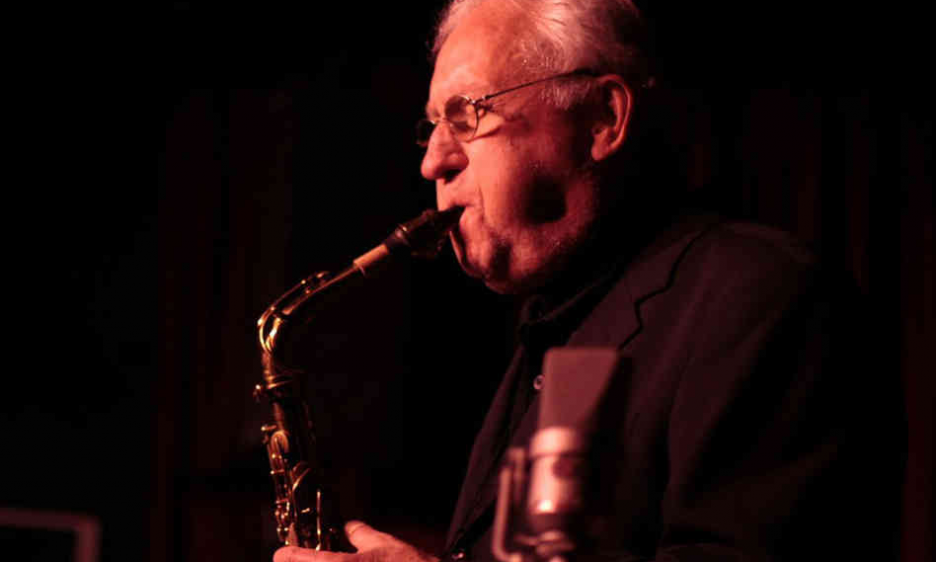 Not many jazz musicians active in the 1940's are still around, never mind on the road, gigging. Last Friday at the Regatta Bar one of these rare jazz birds, alto saxophonist Lee Konitz, came through town, celebrating his 90th birthday. Konitz was an early experimenter with Lennie Tristano, an important member of Miles Davis' Birth of the Cool gang, went on to Stan Kenton and since the mid 1950's, has led groups that comprise a who's who of late 20th/early 21th century jazz.

At the Regatta, Konitz was backed by a trio with George Schuller on drums (leader of Boston's now defunct all-star group Orange Then Blue) and Jeremy Stratton on bass. Stratton often plays with Schuller as well as a number of other groups. Frank Kimbrough was on piano and although Kimbrough had never played with the group, as is often true in jazz performers at this level-that was not an issue. The tunes were well known to all—"Stella By Starlight," "Body and Soul," "Out of Nowhere," a couple of Tristano variations on standards—and the group interplay and cohesion was unassailable.

Konitz presented as the aging hipster he seems to be—sunglasses, laconic presence and an I-don't-give-a-shit attitude. He played seated most of the time and was comfortable with the fact that he sometimes couldn't remember the names of tunes or the names of his sidemen—and they all accepted that as part of the gig. The whole thing was a love fest which, in this case, was easy to buy into. In terms of Konitz's soloing, when you see players who have reached an advanced age, you can expect certain things. The energy is more mellow (Roy Eldridge was an exception) and there's a stripped-down quality to the solos. Such was the case with Konitz. He played like a guy with nothing to prove, shaping his solos with few adornments and no flash-for-flash sake. He did some singing and some scatting in the same vein. Not much voice there, but it added a nice flavor to the mix and no doubt it let Konitz chill a bit between horn solos. There were some failings of breath and tone control in the playing, but the overall result was a simple, distilled clarity.

Some of this had always been in his playing. Going back to the late 1940's, when alto players were imitating Charlie Parker en masse, Konitz presented an alternative approach. His tone was softer, his solos often more angular and sparser than Bird's. In his association with the pianist and teacher Lennie Tristano, Konitz explored unusual harmonies, as well as free playing, opening up a direction pursued by many subsequent musicians-not just alto players.

His show at the Regatta may have been a valedictory lap—I don't know how his health will hold up—but if Konitz comes back to town, check him out. He's all about the story, he has a rare story to tell and he tells it with an almost childlike simplicity and beauty.