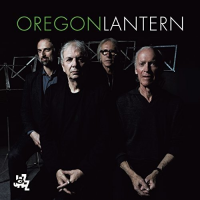 Despite having to replace percussionists a couple of times since its inception in 1970, Oregon's otherwise consistent lineup of reed/woodwind multi-instrumentalist Paul McCandless, guitarist/pianist/primary composer Ralph Towner and double bassist Glen Moore remained unchanged for forty-five years—surely some kind of record in the jazz world. And with current drummer/percussionist Mark Walker joining the group for 1997's Northwest Passage (Intuition), Oregon has, over the last two decades, enjoyed its longest-standing lineup.

Until 2015, that is, when it was announced, on Walker's website, that Moore was leaving the band after forty-three years, to act "on his long held desire to pursue his individual vision of music," and "to spend more time with his family." At the time, while the band announced that it would, indeed, continue, with Italian bassist Paolino Dalla Porta taking Moore's place, there were few fans of the group—in particular, those who've followed Oregon for any significant amount of time—who weren't concerned that his departure would have serious implications for a band whose identity has been so distinctive since first emerging with original percussionist/sitarist Collin Walcott, the result of meeting during its members' tenure in saxophonist Paul Winter's Consort group of the late '60s/early '70s.

Towner may have long been the group's primary composer, but one or two Moore compositions invariably showed up on most Oregon recordings...pieces that, along with the bassist's often unconventional approach, brought a certain playful mischief and wit to the group. In a group whose co-founders had been together as long as Towner, McCandless and Moore, it's undeniable that every one of them brought something special that ultimately contributed to Oregon's collective sound and unique combination of form and freedom.

The good news is that, despite Dalla Porta bearing little resemblance to Moore, Lantern—the group's first to feature its new bassist and first studio effort since 2012's Family Tree (the group's fourth release since finding a new home on the Italian Cam Jazz imprint in 2005 with Prime)—makes clear that, while the influx of new blood has altered the group's complexion to some extent, it remains a group that sounds like no other. Simply put: Lantern remains an album that could be made by no-one else but Oregon.

Oregon may, indeed, have certain signatures that apply to many records, including: a couple of tunes culled and rearranged for the group from Towner's solo discography with Germany's ECM Records (the metrically and thematically knotty "Duende," first heard on the guitarist's Travel Guide (2013), and more pastoral "Dolomiti Dance," from his most recent ECM date, My Foolish Heart); the revisitation of a previously recorded Oregon composition (a more decidedly swinging version of Towner's "The Glide," first heard on the group's final recording with Walcott before his untimely 1984 death in a road accident while the group was on tour in Germany, Crossing (ECM, 1985)); and a collective spontaneous composition, freely improvised by the entire group (the atmospheric, occasionally abstruse title track and only one to feature Towner's synthesizer...and Walker's drum synthesizer as well) that, nevertheless, gradually assumes a semblance of structure and the suggestion of preconception where there is none...one of Oregon's most significant signatures...and modus operandi...since its inception.

Still, if that in any way suggests that the group has settled into a comfort zone, think again: if anything, while there are certain touchstones common to many Oregon recordings, and certain methodologies that have come to define its sound and approach to harmony and melody, Lantern makes clear that, forty-seven years on, and with its two remaining co-founders well into their senior years, Oregon remains as effortlessly surprising and holistically inimitable as it's ever been.

Sure, Oregon is not the regular groundbreaker it once was on albums like 1974's particularly memorable Winter Light (Vanguard), 1980's still thrilling In Performance (Elektra), or its first post- Walcott album with Trilok Gurtu, 1987's Ecotopia (ECM). For any group to exist this long, it cannot possibly continue to be rapidly revolutionary album-after-album; instead it ultimately becomes something more evolutionary, where its ongoing redefinition and development is subtler and more gradual. Still, not only does Dalla Porta infuse the group with fresh blood through a more lyrical approach and less hard-edged tone; he also demonstrates, with his sole compositional contribution— the 7/4, largely hand percussion-driven "Aeolian Tale"—that he clearly "gets" Oregon, on a gently melodic piece that sounds as though it could fit on any Oregon album from across its long career, with Towner's classical guitar and McCandless' soprano saxophone bringing the composition right into the group's wheelhouse.

Walker, too, continues to contribute to Oregon's already sizeable repertoire, this time with the modal "Walk the Walk." With Towner on piano and McCandless, again, on soprano saxophone, the group achieves a rare full-on boil with a track that's not just Lantern's fiercest composition, but one of the group's most flat-out incendiary tracks ever, featuring a drum solo that, constructed with sharp focus, suggests that, despite building a solid reputation over the years (in particular in the Afro-Cuban world), Walker still deserves to find an even broader following.

The ever-virtuosic yet never extraneous McCandless doesn't contribute any new originals this time around, but he does provide a lovely arrangement of the 17th Century Scottish traditional, "The Water is Wide." Not unlike the group's regularly performed look at Jim Pepper's "Witchi-Tai-To," it's a relaxed rendition made all the more "Oregon" through McCandless' choice of bass clarinet as its melodic instrument, with Towner on piano and Dalla Porta, on this track, somehow channelling a hint of Moore during his solo.

Three new Towner compositions round out Lantern's ten-song, hour-long set. "Not Forgotten," with Towner on classical guitar and McCandless on English horn, feels like classic Oregon; Towner's harmonic approach has long been a distinctive part of the Oregon sound, one that few others have been able to approach capturing, and here he solos with the broad intervallic movements that have also become signature for a guitarist informed heavily by his first instrument, piano...even when reduced to but six strings

"Hop, Skip and a Thump" is more playful, with a memorably singable melody—and, like the title, a form that moves from thematic hops and skips to a more thumping pulse, even as Dalla Porta and Walker ultimately bring an amiable, pliant sense of swing to their support of both McCandless' oboe solo and Towner's own turn on classical guitar, while "Figurine" is a pastoral piano-driven miniature—a duet for Oregon's two remaining co-founders that, in its delicate nuances and subtlest turns of phrase, shines a soft spotlight on a chemistry shared by these two for nearly a lifetime.

With Towner now 77, at this point every new Oregon album—or solo release, for that matter—is truly a gift; that said, Lantern demonstrates that neither he nor the group (even with a new member) are in any way slowing down when it comes to music that's filled with effortless mastery and rare collective chemistry.

At its current pace of releases—one every three-to-five years—it is, hard though this may be to contemplate, a harsh reality that the number of future Oregon albums may likely be counted on the fingers of one hand. But whether or not the superb Lantern turns out to be the group's studio swan song or it has another few up its sleeve, when this groundbreaking group—perhaps the first worthy of the description "world music"—is finished, it will have left a legacy few others can match...and a stellar discography of remarkable size, consistency and, equally important, relevance. With Oregon's unparalleled approach to composition, improvisation and performance, and with a collective chemistry as deeply profound and eminently appealing as that heard on Lantern—even with a new member— it's a legacy sure to last long after its time is over...though, hopefully, that time remains in the far distant future.

Dolomiti Dance; Duende; Walk the Walk; Not Forgotten; Hop, Skip and a Thump; Figurine; The Glide; Aeolian Tale; Lantern; The Water Is Wide.