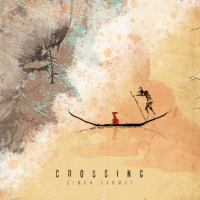 'Crossing' is one of those versatile terms that can be taken many different ways—among other things, it can signify the traversing of a place or boundary, a meeting spot where roads pass each other, or perhaps the act of combining individual things together into a new whole. Simon Sammut means the word in all those senses on his second album. Crossing offers meditative instrumental pieces based on a dozen different concepts, also accompanying each one with a thoughtful background description and piece of often-abstract visual art. Anthony Catania's striking images colorfully reinforce each of the themes and emphasize that this is endeavor is about crossing different media as well as musical styles.

Sammut's supple six-string bass has a warm pleasant tone while the early compositions drift on crisp light drums and airy keys. "Be the Change" makes its statement most overtly with samples of a speech by Jiddu Krishnamurti; otherwise the pieces do their job with atmospheres and evocative melodies rather than words. That track and "Promethean Man" liven things up with the crashing of programmed drum samples, while the rest of the early run spins quieter moods around them before the tracklist builds up steam.

The stronger and more energetic back half is willing to further break out of the easy-listening zone in a couple louder ways. "Frontier" suddenly jumps to the old American west with a banjo-like twang and a rolling rhythmic cadence reminiscent of bouncing wagon wheels. The catchy late-night swing horns of "Fifty Something" provide the album's most straightforwardly fun moment, while the "Princes of Serendip" rounds things off with hard-pounding drums and loud electric guitar wailing across some exotic Eastern scales.

From the sharp sound and production to the attractive artwork, Crossing is a multi-layered labor of love with a lot of thought behind it and a determination to travel through boundaries of all kinds; he and his backing crew can be easy on the ears or as vigorous as the songs demand. Sammut offers the listener a chance not just to listen but to see, think and experience.