By Ian Patterson
September 2, 2012
Sign in to view read count 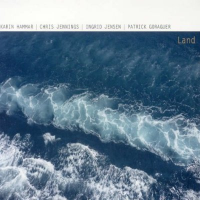 Given the vast, wide-ranging collective experience of the four musicians, which runs the gamut from bop to big band, from South African jazz-fusion to pop, and from Brazilian music to more experimental fields, a more obviously eclectic recording wouldn't have been a surprise. Instead, the music on Land has a distinct, unified identity. Songwriting credits are shared between trombonist Karin Hammar and double bassist Chris Jennings, though there's a strong quartet sound, with trumpeter Ingrid Jensen and drummer/percussionist Patrick Goraguer equally indispensable to its bubbling chemistry. Brass frontline and rhythm section interact lithely, creating a contemporary sound that draws subtly from an array of musical wells, and that above all, grooves like hell.

"Episode 1 To 5" evolves from a one-note bass groove and softly pattering percussion. The somewhat exotic air—as all the voices rise together—is reminiscent of a slow blues by Lebanese oudist/composer Rabih Abou-Khalil. Trombone, bass, and muted trumpet all take short, languid bows, with the respective brass lines mirror images of one another. Hammar and Jensen flirt playfully, skipping between rich unison and independent, yet interwoven lines. Crying, electrified trumpet and growling trombone alter the tune's course briefly but dramatically, before the two join in quiet unison, effecting peaceful resolution.

Dirge-like trumpet/trombone surfaces from time to time on "Fugitive"—paradoxically, a rather up-beat tune. Jennings—whether playing infectious riffs or soloing under the lead voices—is a powerful presence, and forms a propulsive rhythm section with Goraguer. Solos are short but burn brightly before returning to the ports of unison lines and the collective voice. On "On My Line," bass ostinato and an insistent rim shot beat create a truly danceable groove. Jensen's effects-charged, spiraling solo—as drums surge—seems to provide the missing link between trumpeters Miles Davis and Cuong Vu. This atmospheric number would surely rock a live audience.

Warmth of tone characterizes both Hammar and Jensen's playing, wonderfully illustrated on the hymnal intro to "Koral." Jennings again lays down a simple yet absolutely killer bass line, as the brass voices dovetail with a sense of happy abandon. If "Koral" boasts neo-classical grace, then the cool rhythmic vibes, disciplined unison lines and hot improvisations of "Clueless" have an almost celebratory African air. Further contrast is found in the urgent rhythms and charging lines of "Following the Land." Bop-like quartet intensity gradually dissipates, the notes falling, as though exhausted, into a drawn-out, melodic conclusion.

"As Good As New" is a stately baroque blues, a feature for Jensen and Hammar, whose emotive solos embody finesse and economy. Though melancholy in essence, there's also great warmth when their voices unite in the end. "75013" is a sexy, slow-burning gem; Jennings really stretches out, though sacrificing none of the tremendous groove that inhabits his opening ostinato. The bop-flavored—though groove-based—"Fofoquera" sounds like a classic first set closer, and sets the seal on an altogether absorbing recording.

Strong, melodic compositions and a pronounced group ethos—where improvisation never trumps groove—create a fine balance, one which sets the bells and whistle of the gut, heart and head, singing-and-a ringing.