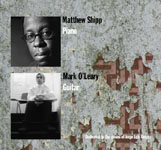 Like impressionist painters, guitarist Mark O'Leary and pianist Matthew Shipp execute a colorific sequence of abstracts, consisting of semi-structured theme-building developments and free-form dialogues. With blitzing firepower, the duo also fuses nuance and temperance into the big picture. They dish out linear, micro-motifs amid subtle shadings, and fragmented exchanges, but O'Leary ups the ante during several movements via his dark-toned, breakneck single note licks.

Shipp's flickering progressions and rhythmically inclined block chords offer a fertile underpinning throughout. They work as a cohesive duo while injecting melodic intervals along the way. The Labyrinth motif comes to fruition throughout, where the duo dissects, interweaves, and refreshes the core song-forms on a continual basis.

O'Leary's use of volume control techniques cast an ethereal aura to Shipp's dainty voicings on "Mosaic." Here, the musicians project a harrowing mindset, framed with a minimalist-like edge. Consequently, they generate some high heat on "The Flock" due to the artists' cat-and-mouse interplay; abrupt detours and ephemeral progressions, occasionally offset by a subliminal nod to the blues. In other settings, the guitarist uses distortion techniques while Shipp complements by enacting a more physical approach to the piano.

The musicians' rapidly-paced impetus is perhaps analogous to an action-packed film, brimming with the proverbial twists, turns and unanticipated surprises. It's a curiously interesting release by two of the premier improvisers in the business.