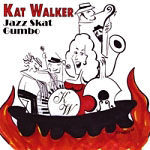 At first brush, Kat Walker's Jazz Skat Gumbo appears to be just one more collection of jazz standards sung by one of the deluge of singers streaming into the already crowded jazz vocals market. Kat Walker indeed sings the standards, but she and her band hail from New Orleans, a fact that adds a decidedly Southern richness and complexity to the performances. This does not manifest as an incorporation of Dixieland elements, but rather an earthier, peatier quality to the songs, a quality first realized in Walker's slightly odd and raspy voice.

Walker's voice is unusual in that it is not exactly pretty, but it is unique, accurate, and precise, not unlike that of Louis Armstrong's. She adds a sensual edge to her singing that complements the two-fisted barrel-piano playing of Bart Ramsey, who propels all of the selections with his assertive style. Tenor saxophonist Dominick Grillo does not mire himself with prim balladic niceties, instead opting for an almost Texas Tenor approach; full bore and wide open. The sum of this is that these performances are gleefully more "Gimme a Pigfoot and a Bottle of Beer" than "Moonlight in Vermont."

Walker and company's approach is best heard on a bossa "Cry Me A River" and an extra humid "Fever." Ramsey wedges solos into the pieces sideways, giving them the overall structure of a cubist painting. Grillo demands attention when soloing, affairs all well conceived and performed. "Ain't Misbehavin" and "Over the Rainbow" are special treats, each presented with a swinging momentum. Walker's interpretations satisfy the desire for the standard fare performed in a non-standard manner. This is beautifully funky, viral, infectious music.

It Don't Mean a Thing; Cry Me a River; My Favorite Things; Fever; The Lady Is a Tramp; Am I Blue; When You're Smilin; Mack the Knife; Bobbie Mcgee; Loverman; I Got Rhythm Hernando's Hideaway; Ain't Misbehavin'; Over the Rainbow.