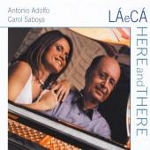 La e Ca: Here and There is ostensibly a piano-oriented album by Brazilian pianist/composer Antonio Adolfo, featuring frequent collaborator and vocalist Carol Saboya, who appears on five of the disc's twelve selections. Saboya is rightfully given equal billing because of her exquisitely lightly-accented, dangerously intoxicating vocals, transforming tried-and-true vocal jazz standards. The spiritual presence of the American Southern Hemisphere permeates the recording like a breezy humid night, spreading warmth all points south.

Saboya's selections are certainly predictable, and as such must be rendered extraordinarily. They are. Her opening, "All The Things You Are," from the 1939 Kern/Hammerstein production Very Warm for May, kicks off with a light samba personality, Saboya's light alto infusing the lyric aromatically while Aldolfo plays orchestrally. Jon Hendricks' worded "Night in Tunisia" allows Saboya space to show off her technical scat chops. A half world away from the subject, Saboya draws the dry glow of exotic climes from the song.

Sammy Cahn's "Time after Time" proves Saboya's finest moments in an already exceptional recital. Saboya, Adolfo, and guitarist Leo Amuedo reach that rare triple point of musical empathy. Saboya's voice is naked and perfectly balanced, while Adolpho's accompaniment and solo are lyrical lace, dressing the piece. Saboya and Aldolfo are equally at home with Jobim's "Sabia" proving that Portuguese is a beautiful language sung. Nearly as compelling as "Time After Time" is Cole Porter's "So in Love." Porter is a favorite of Aldofo's, who spins out instrumental "Easy to Love" and "Every Time We Say Goodbye" (the latter coupled with Jobim's "Nuvens Douradas") and "Night and Day" (coupled with Aldofo's "Toada Jazz (O Retirante)").

Aldolfo's rendering of Thelonious Monk's "'Round Midnight" is transforming, the classic jazz ballad seamlessly taking on an airy Latin quality. So long dominated by Gil Evans' arrangement for trumpeter Miles Davis, Adolfo's "Midnight" is embracingly fresh, while still being familiar, like meeting a soul mate. La e Ca: Here and There is a most successful conception on the parts of both Saboya and Adolfi, Brazil's best-kept secrets.

Cascavel; All The Things You Are; Minor Chord; A Night In Tunisia; Time After Time; Easy To Love; Sabia; Lullaby of Birdland/Garoto; So In Love; 'Round Midnight; Every Time We Say Goodbye/Nuvens Douradas; Toada Jazz (O Retirante)/Night And Day.