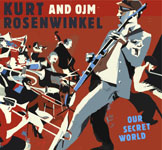 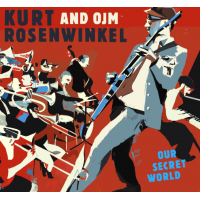 With the creative possibilities offered by its expanded palette, it's no surprise that so many artists who traditionally work in the context of more pliant, small ensembles turn to larger settings at least once in their career. For those already predisposed to greater compositional complexity, the intrinsic challenges are many; but so, too, are the ultimate rewards. It's no surprise, then, that Kurt Rosenwinkel—perhaps his generation's most influential guitarist, spawning almost as many imitators as Pat Metheny (himself, an early influence on Rosenwinkel)—has been collaborating with big bands in Europe for the last several years. What is surprising, however, is that Rosenwinkel has waited until 2010 to release an album featuring big band arrangements of some of his best writing. With a result as fine as Our Secret World, however, it's unlikely that many of the guitarist's large fan base would argue it's been anything but well worth the wait.

Following the slight sidestep of Rosenwinkel's Reflections (Wommusic, 2009)—a simmering album of mostly jazz standards, recorded with an empathetic trio that demonstrated just how much the guitarist's interpretive skills have grown since his early, similarly cover-heavy live album, East Coast Love Affair (Fresh Sound New Talent, 1997)—Rosenwinkel returns to a set of entirely original compositions. There's nothing actually new to be found, however, as the guitarist delves back to the lengthy, episodic "Dream of the Old," first heard on The Enemies of Energy (Verve, 2000) and forward to the equally colorful but more inherently effervescent "The Cloister," from Deep Song (Verve, 2005), an all-star session that also featured pianist Brad Mehldau and saxophonist Joshua Redman.

This time, however, Rosenwinkel eschews star-power for the built-in chemistry of Orquestra Jazz de Matosinhos (OJM), a near-15 year-old Portuguese ensemble that approached the guitarist with the idea of collaborating in 2007. That all but one chart ("Dream of the Old") was scored by OJM's Carlos Azevedo, Pedro Guedes or guest arranger Ohad Talmor without the guitarist's involvement, speaks to their surprisingly deep understanding of some of his most difficult compositions, and to the entire 16-piece ensemble's ability to traverse music that, at times, hints harmonically at Joe Zawinul and the orchestral expansiveness of Vince Mendoza, but ultimately sounds like nothing but Rosenwinkel.

Simply stunning throughout the disc, Rosenwinkel solos with particularly breathtaking vertical and horizontal movement on "The Cloister," while turning more lyrical on the balladic "Use of Light," one of three tunes culled from The Next Step (Verve, 2000), still considered by most to be a particular watershed in a discography that's nothing but high points. Rosenwinkel's ethereal mélange of heavily overdriven and harmonized guitar with his falsetto voice—blended so seamlessly as to create a singular whole—has never sounded so distinctive, despite an increasing number of guitarists constantly trying to copy his unique approach to sound, melody and harmony. A staple of Rosenwinkel's live performances for many years, "Turns" makes its first appearance on record here, its complex combination of rich timbres, knotty counterpoint and effortless, Afro-centric polyrhythms vividly contextualizing and recontextualizing Rosenwinkel's solo—a near-relentless push-and-pull of ascending and cascading linearity.

As much as Our Secret World represents some of his finest playing to date—eclipsing, even, his seemingly unmatchable invention on the double- disc The Remedy: Live at the Village Vanguard (Wommusic, 2008)—it's as much a reflection of Rosenwinkel's remarkable acumen as a writer, with an emergent compositional voice as early as The Enemies of Energy, only his third album as a leader, and the first to focus exclusively on original material. Amidst seven stunning arrangements, Azevedo's powerful rework of the groove-driven title track—originally on Rosenwinkel's "electronica" album, Heartcore (Verve, 2003)—turns it into something more organic, encouraging a solo from Rosenwinkel that, the first of the disc, sets the bar so high that it's hard to believe he actually manages to match and raise it even further throughout the rest of the 66-minute set.

With the brighter sonics of a brass and horn section, it's often easy for a big band album to hit visceral highs out of reach of smaller ensemble discs. But the excitement of Our Secret World—coupled with beauty that often reveals itself at the most unexpected moments—has nothing to do with the obvious, and everything to do with the perfect combination of compellingly unique source material; arrangers who dig, with perfect instinct and careful consideration, into the spirit and essence of the music to turn out charts of even greater complexity and depth; and a clearly talented ensemble, capable of navigating the scores with ease and an equally ideal mix of power and understatement. As undeniably fine as OJM is, however, it's hard to deny the real star of Our Secret World: Rosenwinkel. He is at the top of a game on the ascendancy with each successive album, and his gradually growing repertoire speaks of tremendous import and a continually evolving concept of sound, harmony and improvisation that's as personal, inimitable and, indeed, secret a world as it is inspirational and appealing to the guitarist's growing legion of fans—and aspiring musicians who continue searching for points of entry.