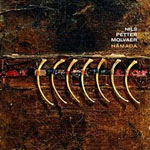 It's been four years since Norwegian trumpeter/Nu Jazz progenitor Nils Petter Molvær released a studio album (excepting Re-Vision (Sula, 2008), a collection of film music). When he performed at Punkt '07 in Kristiansand, Norway, it was one of his final performances with his longstanding group of guitarist Eivind Aarset, live sampler Jan Bang, turntablist DJ Strangefruit and drummer Rune Arnesen. Aarset and Bang return on Hamada, but it's a significant change for Molvær, representing a number of directional shifts and a sharp contrast to er (Sula, 2005).

Molvær's music is cinematic in scope; soundtracks to the imagination, his albums are best experienced as an integrated whole, although there are standout features throughout these ten original tracks. "Exhumation" opens with a lone trumpet; a plaintive and darkly lyrical call enhanced by just a touch of reverb. Segueing into "Sabkah"—where soft percussion and Aarset's tremolo'd guitar recall Ry Cooder's folkloric soundtrack to Wim Wenders' Paris, Texas (1984) in spirit, if not in specificity—the mood gradually becomes more atmospheric, leading into the ethereal "Icy Altitude." Gentle, with the unique, non-guitaristic soundscapes for which Aarset has become known, its paradox of ambient beauty and spare melancholy does nothing to prepare for the harsher realms of "Friction."

One of two tracks to feature a full group—drummer Audun Kleive creating a busy pulse far distanced from the techno/hip hop rhythms of earlier Molvær releases—"Friction" speaks with aggression and anger new to the trumpeter's canon. Heavily processed trumpet blends with sharply distorted, noise-laden guitar textures to create an anarchism that settles down, with great respite, into "Monocline," where Jan Bang's field recordings of children and other processed sounds from the street lead into a Gamelan-like passage, as Molvær's economical melodies provide a clear focus for the rich aural landscape around him.

"Cruel Attitude" best represents Hamada's paradigm shift. With Kleive's thundering pulse, bassist Audun Erlien's throbbing bass and Aarset's chaotic waves of sound working in concert with Molvær's equally hard-hitting and aggravated lines, it descends into a maelstrom of sound before settling into a near-anthemic coda with unexpected progressive rock overtones, reminiscent of King Crimson's "Coda: I Have a Dream," from The ConstruKction of Light (DGM Live, 2000). Another solo track leads to the more atmospheric "Anticline," reprising elements from "Monocline" to end the album on a more tranquil and optimistic note.

Hamada sounds unlike anything Molvær has done before, though it would be impossible for him to have achieved it without traveling the path he has since the groundbreaking Khmer (ECM, 1997). Stunning growth and unexpected directional shifts make Hamada one of Molvær's most moving and challenging records to date.