Eden Brent: Ain't Got No Troubles

By Woodrow Wilkins
August 31, 2010
Sign in to view read count 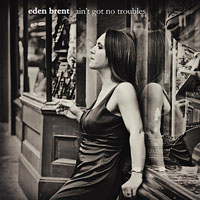 Fun. Plain, simple fun. That's Eden Brent in a nutshell. Whether she's in concert, at a festival or helping out fellow musicians, this vocalist and pianist thrills crowds wherever she plays. Ain't Got No Troubles, like her previous recordings, brings that same level of joy and energy.

A longtime protégé of Abie "Boogaloo" Ames, Brent grew up in the Mississippi Delta, surrounded by musicians. Her late mother Carol, and sisters Jessica and Bronwynne, all wrote and performed music. Eden Brent is a three-time Blues Music Award-winner, earning the 2009 Acoustic Album of the Year for Mississippi Number One (Yellow Dog) and Acoustic Artist of the Year, and 2010 Pinetop Perkins Piano Player of the Year. She also has toured domestically and internationally.

For Ain't Got No Troubles, the raspy-voiced Brent is accompanied by Canadian guitarist Colin Linden, electric bassist George Porter Jr. and drummer Bryan Owings, with assorted guests on selected tracks.

The bouncy title song is one of eight written by Brent, as she sings, "Ain't got no buddies, ain't got no friends, ain't got no man, got no home to keep him in." The band throws in a little Dixieland during the middle break, with the horns underscoring Brent's playful keys.

"Let's Boogie-Woogie" says it all. Owings shows off a little on this track, making effective use of the crash and splash cymbals, while Linden solos on electric guitar. The quartet engages several stop-time lines on a song that inspires movement on the dance floor.

Linden plays acoustic guitar, as he and Brent perform a duet on "If I Can't." Brent sings, "I ain't much good without you, babe, it's plain to see; I was made for you and you were made for me." Like many of the songs, this one is a throwback to a long-ago era when popular music was devoid of electronic enhancements, and the music was more honest.

"Ain't Got No Troubles" is the only song in this set to breach five minutes, the others fitting comfortably in the three-to-four-minute range. Brent purposely keeps them short to maximize the possibility of radio play, but packs a lot into the short running times. However, it's a sad day when the commercial-heavy atmosphere of radio leads artists to produce albums with 11 possible singles and only one—or fewer—album cuts. The artists, and the listeners, deserve more freedom.

Despite that, Ain't Got No Troubles represents Brent at the top of her game. To some degree, nearly every song is autobiographical. And all are delivered with flair.

Someone to Love; Ain't Got No Troubles; Later Than You Think; Right to Be Wrong; Leave Me Alone; Let's Boogie-Woogie; My Man; Beyond My Broken Dreams; If I Can't; In Love With Your Wallet; Goodnight Moon.