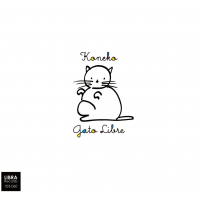 Gato Libre has long represented the anthesis of the larger Natsuki Tamura / Satoko Fujii portfolio. Haunting melodies and striking improvisations have been the mark of the group throughout their quarter-century of work. Trumpeter Tamura and partner/accordionist Fujii have been the pillars of the group since its debut, Strange Village (Muzak Inc, 2005). Bassist Norikatsu Koreyasu passed away in 2011, and guitarist Kazuhiko Tsumura in 2015, shortly after trombonist Yasuko Kaneko first appeared on Gato Libre's DuDu (Libra Records, 2014). Continuing on as a trio, Koneko is Gato Libre's eighth album.

As a composer, Tamura shares a philosophy with Fujii: provide the musicians with the basic idea and then let their improvisations inspire the creative process. The improvisations on Koneko are more consistently stormy compared to other Gato Libre projects. "Kaineko" opens the collection in an unhurried cadence but around the half-way point Fujii invokes a toy horn-type tooting on the accordion; Kaneko and Tamura, in tandem, inject new potency. Tamura unleashes one of his trademark squalls before Kaneko and Fujii bring the piece back to earth. On the very appealing "Yamaneko," Fujii's accordion conjures familiar European folksiness; Tamura joins with quiet, stately brass and the forlorn trombone cements the melancholy. Lighter, and more flowing, but in a similar vein is "Ieneko," which soars impressively on Tamura's trumpet before coming to a tentative conclusion.

As they had done on their previous trio album