By MARK CORROTO
September 22, 2009
Sign in to view read count 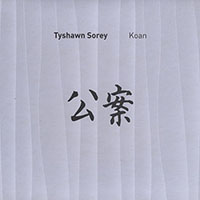 Who would have thought that it would be a drummer to finally, and successfully bridge the worlds of jazz, minimalism, and improvisation? But, it is indeed Tyshawn Sorey, maybe known best for his work with the almost always frenetic players Vijay Iyer and Steve Lehman in the band Fieldwork, or through gigs with Dave Douglas, Steve Coleman and Wadada Leo Smith.

Koan follows the critically acclaimed That/Not (Firehouse 12 Records, 2007), a double-disc set that hinted at the brooding music to come. Here, Sorey has assembled a trio with guitarist Todd Neufeld and bassist Thomas Morgan (also doubling on guitar). Sorey's music reveals itself slowly and in a most quiet way. Inside the pacing and meditation of sounds is the players' very self- effacing improvisation. The ambient nature of the sounds encourage leaning into the listening experience and gathering meaning from the sound, rather than the robustness generally associated with improvisation. Not quite chamber jazz, minimalism, free, nor any category, the harmonious and organic sounds are as strange yet attractive to the western ear as the Zen practice to which Sorey attends.

Listening to Koan conjures images of Forest Whitaker in Jim Jarmusch's 1999 film Ghost Dog, as the modern day samurai whose dedication to tradition makes him an anomaly in society. Likewise, Sorey's compositions lead away from traditional jazz (and, moreover, free improvisation), but command attention to each moment of music making.