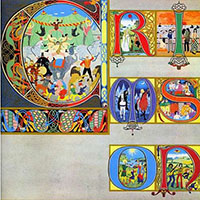 Often forgotten and sometimes maligned, Lizard is a King Crimson classic that's waited to be found for nearly 40 years. When it was first released in 1970, it was quickly overlooked as a transitional album between the group that recorded/released/toured its seminal debut, In the Court of the Crimson King (DGM Live, 1969) and the Crimson incarnation that would hit the road in support of Islands (DGM Live, 1971) a little over two years later. Lizard was never toured, but with copious overdubbing and the invaluable support of guests from the British jazz scene it would have been nearly impossible to recreate live. The Islands group performed the nightmarish opener "Cirkus" and pastoral ballad "Lady of the Dancing Water," but never truly captured these songs' stunning brilliance. The third in its series of remix/remasters, featuring new stereo and surround remixes, pristine remastering and lush packaging, Lizard (40th Anniversary Series) finally vindicates a relatively small group of fans who've always felt the album was an underappreciated masterpiece of progressive rock, with the emphasis on the term "progressive."

When Crimson co-founder/guitarist Robert Fripp released In the Wake of Poseidon (DGM Live, 1970), it was an album that capitalized on the same strengths as its immediate predecessor, In the Court of the Crimson King, with one side a near-formulaic replication of that album's first side (back in the days of vinyl). But side two, with the quirky blues "Cat Food" and, even more, the frightening "Devil's Triangle" (loosely based on classical composer Gustav Holt's "Mars, the Bringer of War"), suggested a new direction for this symphonic group, as pianist Keith Tippett added idiosyncratic free play to Fripp's own angular approach to improvisation. Crimson was always an improvising group despite the often strict confines of structure, but here the group, despite its fractured personnel, was heading into uncharted territory.

Lizard was, ultimately, the culmination of Fripp's jazzier proclivities, with Tippett back alongside other jazzers including cornetist Mark Charig and trombonist Nick Evans, both alums of Soft Machine's Fourth (Sony, 1971). Saxophonist/flautist Mel Collins, who'd become an official Crim on the strength of his Poseidon work, and who'd continue on with the Islands band, managed to traverse the dissolving boundaries between Tippett's more jagged spontaneity and the requisite lyricism of "Lady of the Dancing Waters." Gordon Haskell's voice was always considered somewhat weak, yet there's no other Crim alum who could bring the kind of near-insanity he does when delivering lyricist Peter Sinfield's absurdist "Indoor Games," his allegory to The Beatles on "Happy Family," or frightening madness of "Cirkus." He was an equally undervalued bassist, and Steven Wilson's sonic restoration here gives his instrument all the warmth and breadth necessary to support the claim.

Drummer Andy McCulloch was, in some ways, cut from the same cloth as departed Crimson co-founder Michael Giles, capable of navigating Fripp's most oblique writing to date on the side-long, epic and episodic title track. Symphonic concerns mesh with unfettered liberation throughout the record, as Fripp remains almost entirely avoidant of standard rock guitar posturing. That said, his silky, sustaining solo on "Lizard"'s hypnotic coda, and his masterful layering of electric and acoustic guitars throughout the album make clear that Fripp—responsible for writing all of Lizard's music alongside lyricist Sinfield—was already one of the most inventive guitarists operating in the rock sphere. Wilson's lucent remix reveals Fripp's brilliant but often dramatically understated playing, as in his lead-in to "Cirkus"' final verse. Compositionally, this is unequivocally Fripp's most advanced work to date, not to mention penning the five scariest mellotron chords in rock history on "Cirkus."

The bonus material is scant but interesting, albeit largely from an archival perspective. An alternate, piano-driven version of "Lady of the Dancing Water" lacks Evans' warm trombone and misses the mark achieved by the final version. A remix of "Lizard"'s second movement, "Bolero," from the Frame by Frame (DGM Live, 1995) box set where Fripp replaced Haskell with then-Crim Tony Levin, is rendered superfluous by Wilson's new remix of the original and Haskell's now more apparent strength as a bassist. A studio run-through of "Cirkus" is interesting, if only to hear Fripp's creative acoustic guitar work, an alternate to the take he'd ultimately use and, in the end, good but not as good.

As with 40th Anniversary Series editions of In the Court of the Crimson King and Red (DGM Live, 1975), the surround mix makes greater use of rear channels than most, turning the soundscape into a truly ll-encompassing one while avoiding all pretense or suggestion of gimmickry. For most, however, it's Wilson's remarkable new stereo remix that will be the one listened to most often, and he brings depth and clarity to a recording that, as filled as it is with instrumental layers, always ran the risk of sounding cluttered. Now, with full transparency, Wilson's remix reveals more with each successive listen.

Fripp has never looked upon Lizard fondly. In his liner notes he states: "Within the corpus of Crimson albums, Lizard is, historically, one of the least popular...Nevertheless, some strange characters in the listening community liked, even developed a passion for Lizard...Perhaps the leading very-strange-Lizard-lover is Steven Wilson...And, from time to time, in different places, I have met others who admit to the same strange passion. Now I can hear why. The music of Lizard is redeemed."

For those who come to Lizard for the first time, or felt that it never quite succeeded on its own terms, Lizard (40th Anniversary Series) may well be a "eureka" moment. For those "very-stranger-Lizard-lovers," this exceptional package not only vindicates their guilty pleasure, it clarifies exactly why Lizard is a classic album that fuses progressive rock, free jazz, classical music and other sources into a mélange that transcends easy categorization. There's never been another album quite like Lizard, and it's now time for the album to take its rightful place as one of King Crimson's most remarkable—and successful—experiments.