By Mark Corroto
November 13, 2009
Sign in to view read count 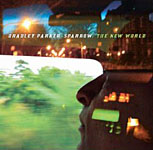 The first nine of eleven tracks coalesce into the theme inspired by Antonín Dvořák's 1893 "New World Symphony," inspired by the Czech composer's trip to America and his discovery of Native-American and African-American musics. Here, Parker-Sparrow expands the 21st century New World to include the influence of South America and Asia on American music-making. Assembled are Asian-American saxophonist Francis Wong and bassist Tatsu Aoki, Brazilian-born percussionist Dedé Sampaio, and jazz vocalist Joanie Pallotto, who was also the recording engineer.

What begins with a very simple bowed introduction unfolds gently into a graceful landscape, each artist caring for his sound, be it Aoki's shamisen (3-string lute), Sampaio's Brazilian musical bow, Wong's shinobue (bamboo flute) or Parker-Sparrow's piano harp, harmonica, and calimba. The theme here is cross-cultural music making; not "this-is-good-for-you" medicine, but that of like-minded kindred spirits creating from the same page.

The music breaks into some inspired combinations. Pallotto's wordless vocals accent the swinging beats of Sampaio, while Aoki lays down the heavy groove on "Pinwheel." "Skip Hop" begins at Miles Davis/Gil Evans' Sketches Of Spain (Columbia, 1960), with both Sampao and Parker-Sparrow dancing notes behind Wong's John Coltrane-inspired tenor before the piece turns introspective. The emotional shift via the Parker-Sparrow's sensitive touch signals a melancholy end by the players.

Parker-Sparrow's playing can be as light as a feather and come as thunder, as heard on "Secret Code," his duet with Wong. The final two tracks, one a spoken piece and Parker-Sparrow's studio-programmed "Kanye OK, OK (She Wants A Jazz Man)" are Gil Scott-Heron-inspired rap lessons for the next generation of stars that know nothing of their roots. Maybe Kanye West should start his schooling right here.