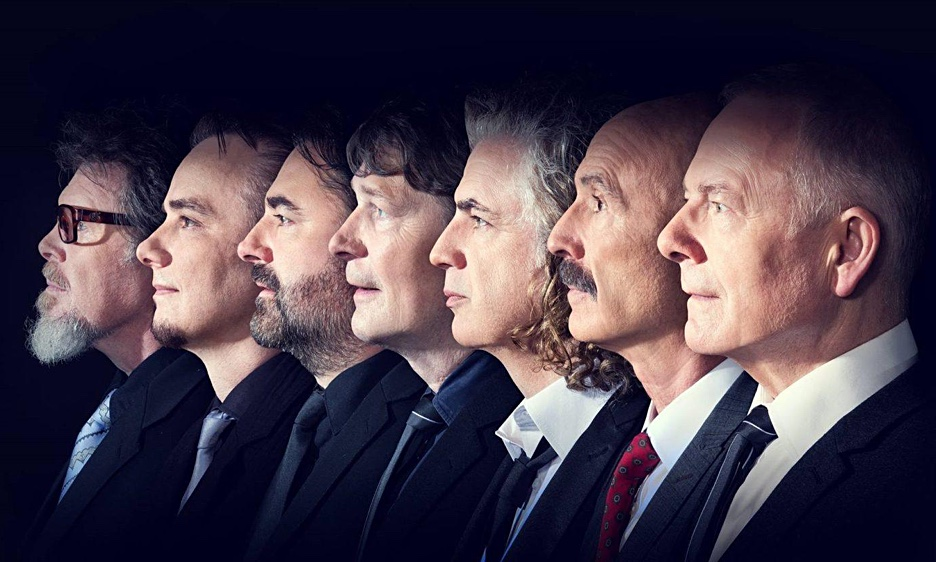 King Crimson released its first album 50 years ago, In the Court of the Crimson King (Island, 1969). The album immediately established the band as one of the foremost progressive rock acts of the time. It was ambitious music: complex arrangements, quirky time signatures, unusual instrumentation. A cult following quickly arose.

It was a band that reveled in contrasts. The first album kicked off with "21st Century Schizoid Man" with its intentionally distorted vocals and multiple hard rock licks. The album also featured delicate and beautiful compositions like "Moonchild" and "Epitaph." Contrasting sounds have been a hallmark of the band ever since. And, this is a band that has formed and reformed over the years with the results being that the sound of the band from different time periods in its history fluctuated and contrasted from other periods.

Early Crimson incorporated the mellotron and, along with judicious use of reverb, created massive and majestic (fit for a king!) soundscapes. Sunday night, the band was able to recreate that atmosphere to give a sense of floating through a huge, somewhat undefined space; maybe it was a giant cavern or possibly a Boeing assembly plant. It was hard to tell for sure since the edges and the outlines were fuzzy and ill-defined.

By contrast, the music from the fourth incarnation of Crimson, from the '80s, seemed much more compact and intimate. Plenty of twin-guitar eighth notes, played in unison or weaving in and out in clever counterpoint, ruled the day. Adrian Belew was lead singer and primary foil for guitarist/band co-founder Robert Fripp. The songs were shorter and less rambling, and the effect was a sound quite different than the music of the band's first decade.

Sunday night, King Crimson worked both sides of the divide. The intricate dual guitar lines displayed the string wizardry of Fripp and second guitarist/vocalist Jakko M. Jakszyk, and was a sight and sound to behold but lacked the immense space and vast expanses conjured up by the older material. The band intermingled older and newer, but the second set displayed a significant bias toward the vintage material with crowd favorites like "Easy Money," "Starless" and "In the Court of the Crimson King." The encore finished the show where the band began with "21st Century Schizoid Man."

Leader and only constant member of the band, Robert Fripp, now 73, sat in the back far corner of the stage and generally stayed with the same Fernandes Goldtop Custom guitar throughout the evening. His playing on all the intricate pieces, alone and in unison, hadn't diminished at all. The complicated arrangements were all tight and often explosive. Jakszyk went toe to toe (or finger to finger) with Fripp and reproduced the Belew sound from the '80s when required. Jakszyk also handled vocal duties and seemed to struggle at times to get the job done. He accurately hit all the notes, but his vocal performance couldn't be classified as "belting it out." To be fair, he certainly wouldn't be the first singer to find a challenge at 5280 feet. King Crimson has been through many vocalists over the years and his vocal quality was probably closest to the late John Wetton who sang on a number of early stage albums.

A highlight was the presence of Mel Collins on saxophones and flutes. Collins was with the band from 1970-1972, guesting on the '70s-era studio swan song, Red (Island, 1974), rejoining the current band in 2013. He also spent time with other progressive rock English bands either as a member or a guest on numerous studio albums. He had an important role in many albums by Camel and the Alan Parsons, and played with artists including Dire Straits, Eric Clapton, Phil Manzanera, Bryan Ferry, Caravan, Tears for Fears and Joan Armatrading, amongst others. Sunday night, he played four different saxophones and two or three different sizes of flutes. He rarely carried the melody and only had a couple improvised solos, but his strength was in setting the mood and helping to create the space that is integral to those early compositions. A highlight of his playing came amid the insanity of "21st Century Schizoid Man," where he threw in a quote fromDuke Ellington's "Take the A Train." As wild a contrast as you're likely to hear, but it worked.

Tony Levin is another long-time member, joining '80s-era Crimson for Discipline (Editions E.G., 1981). Sometimes he played a fairly conventional electric bass, but one with a fifth string. Other times he played the Chapman Stick, in Levin's case a 10-stringed tapped instrument with no real body that is quite versatile as it can be used to pianistically play bass lines and melody lines or chords simultaneously. Most importantly, it looks really cool and is the perfect instrument for a quirky band like King Crimson. As with all the members, Levin was busy all evening, also playing an electric upright bass. He laid down an often menacing undercurrent and was always hyperactive.

Speaking of quirky: Three drummers up front! They took turns. They played together. They completed each other's sentences. They had a couple different opportunities to play their own trio sequences. They would trade licks back and forth, sometimes going round and round and sometimes back and forth. With the entire band in high gear, they would raise the stakes to a percussive frenzy. Some fun.

The band was militant about prohibiting pictures during the performance. Signs on the stage before the show and during the intermission announced a policy threatening expulsion from the theatre for a violation. A pre-show announcement over the PA reiterated the restriction but offered an olive branch by promising a photo op at the end of the show. The policy seemed to be enforced by ushers patrolling the aisles during the show in search of miscreants. But when the final chords of "21st Century Schizoid Man" finally subsided, the cameras came out...on both sides of the stage.