By John Kelman
September 14, 2012
Sign in to view read count 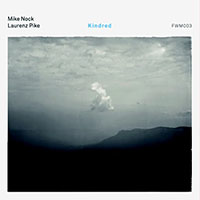 Despite the lack of major label support—or, perhaps, as a result of it—jazz appears to be in a strange period of ascendancy, where the number of people playing it seems diametric to the industry support it receives. New Zealand-born Mike Nock should know; since relocating to Sydney, Australia in the mid-1980s—after spending a quarter century in the US, co-leading early fusion group The Fourth Way, releasing a series of outstanding records like In Out and Around (Timeless, 1978), and cutting his teeth with saxophonist John Handy and, most significantly, woodwind multi-instrumentalist Yusef Lateef—Nock has, in an educational role and on the bandstand, helped foster a scene that he now describes as "a mecca for younger jazz musicians whose music touches on a wide range of cultures, which I find quite amazing and inspiring."

Mentoring, however, is meant to work both ways and, on Kindred, Nock collaborates with former student Laurenz Pike, who has since gone onto his own success with the electo-centic post-rock band, PVT. If Nock was a seminal part of Pike's early days—the thirty-something drummer first studying and, ultimately, touring the world with the septuagenarian pianist—the two are now on equal footing, clearly inspiring each other in a set where improvisational spirit and linguistic reference points place it in the jazz continuum, even if it's not exactly your granddaddy's jazz.

Pike's involvement in the realms of electronics and post-production barely surface here. Kindred's only obvious nod is, in fact, the three-second gap between the opening title track—where Pike contributes one of the few solid (albeit light and pliant) pulses—and the impressionistic "Zeus' Dream," where a single piano chord (from the start of "Satori No Mado," perhaps?) is placed, backwards, swelling from nothing to a crescendo that cuts suddenly when Nock's dark-hued pianism begins. Pike's role is largely textural—as it is throughout Kindred's 12 pieces and 50 minutes—his soft-malleted tom-toms and cymbal swells moving in concert with Nock's dynamically fluid performance.

These 2011 sessions were conceived as music-making without a safety net, and it's clear that Nock and Pike—separated by nearly 40 years—didn't need one. Still, these relatively brief free improvisations are all defined by an unmistakable and immediate sense of purpose. On "All Most Blues," Nock's left hand suggests the bass line to trumpeter Miles Davis' near-iconic "All Blues," from Kind of Blue (Columbia, 1959), but staggered to the point where, when the duo does settles into a defined groove, it's only in passing. "Le Primitif" broaches similar territory, not unlike some of Keith Jarrett's solo work in feel but, with a partner in the proceedings, traveling to places Nock would not likely have gone, were he on his own.

If neither Nock nor Pike opt for overt virtuosity it's because neither needs to. Instead, much like the Sydney scene the pianist helped build, Kindred reflects the "wide range" which Nock finds so inspiring, and is yet another top-drawer recording from an elder jazz statesman continuing to repay, without compromise, the debts of his own formative years.