By Jeff Winbush
August 3, 2017
Sign in to view read count 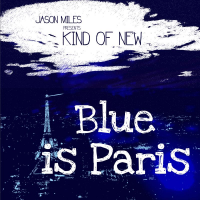 You can't fault the motivation behind keyboardist Jason Miles' sequel to Kind of New (Whaling City Sound, 2015). Miles wanted to respond to the 2015 Paris terror attack and Kind of New 2: Blue Is Paris is the result, but though the motivation is solid, the execution doesn't match it.

With Kind of New, Miles was joined by Ingrid Jensenon trumpet in his well-received tribute to Miles Davis and the seminal Kind of Blue. Here, Miles decided to take one track and then perform it nine more times with different musicians and arrangements with the inspiration this time being George Shearing and Davis. It's an interesting approach, but here it doesn't come off.

The first version of "Blue Is Paris" features a lush vocal by Maya Azucena and Miles provides an arrangment so stylish it sounds like it could be the title theme of a James Bond movie yet to be made. Drop a string section behind Azucena and it's a natural for the guy with a license to kill. "Blue Is Paris: Sunshine" is not only a strong lead-off, as the album unfolds it turns out to be the high point not to be matched by the nine subsequent versions.

Is it ambitious to offer the listener ten tracks with only slightly different arrangements or is it tedious? Regrettfully, "Blue Is Paris" turns out to be the latter, because the track is not so dynamic a tune to stand up to repeated listening for 50 minutes. Miles features a different musician on each track, but fails to vary the arrangement significantly until the ninth track, "Blue Is Paris: Thunderstorm" and switching out who's playing the solo (Miles employs four trumpeters, a guitarist, a saxophonist, a percussionist, and vocalist as well as a core band, but it's not enough to push Kind of New 2 up and over the hill.

If you're a fan of remix records, this might work for you, but others may get enough of the staccato echo before Azucena returns to close out the record with a nearly note-by-note reproduction of the lead track.

Give Jason Miles credit for taking inspiration from Shearing and Davis instead of imitation. He's an enterprising and purposeful artist who keeps pushing himself and the listener by steadfastly refusing to play it safe and mail it is as too many others jazz acts do. This time around there's too much redundancy here to make this a step forward by Miles. Call it more of a side-step.