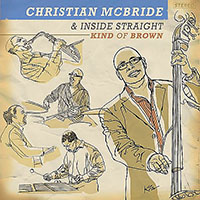 Since arriving in New York City in the late 1980s, where he briefly studied at Juilliard, Christian McBride has been one of jazz's most in-demand bassists. In addition, he has become a valuable composer, arranger and jazz educator with a wide-open interest in many musical styles.

The initial CD by McBride's Inside Straight quartet features saxophonist Steve Wilson, pianist Eric Reed and drummer Carl Allen (with whom McBride worked in Benny Green's trio), expanding to a quintet on some tracks with up-and-coming vibraphonist Warren Wolf, Jr. Seven of the ten tracks are originals by the leader, several of which are tributes. "Uncle James" is a soulful, soft jazz waltz saluting the late James Williams, a beloved jazz pianist and educator who died in 2004 after a brief battle with cancer. Wilson's upbeat soprano sax floats over the whispering rhythm section, with Wolf adding a potent, understated solo.

Cedar Walton is honored by "The Shade of the Cedar Tree," a delicious hard bop number that would have fit the repertoire of Art Blakey's Jazz Messengers, with a potent lead by Wilson on alto sax, Reed and McBride. The leader pays tribute to Freddie Hubbard, with whom he worked, on a percolating treatment of the late trumpeter's blues, "Theme For Kareem," offering some of his most intricate playing of the session.

Although not stated, McBride's "Used 'Ta Could" could easily be considered a tribute to his idol, the late Ray Brown, a subdued but funky number with a touch of gospel, with his arco playing reminiscent of the late Paul Chambers. With a CD full of obviously winning tracks, bet the entire pot on Inside Straight.

Brother Mister; Theme For Kareem; Rainbow Wheel; Starbeam: Used 'Ta Could; The Shade of the Cedar Tree; Pursuit of Peace; Uncle James; Stick & Move; Where Are You?