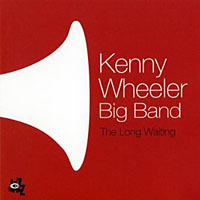 While likely not the reason behind its title, The Long Waiting could easily fit for fans of the Canadian expat trumpeter who has lived in England since the 1950s. Since coming to Cam Jazz in 2004 with his duo recording with longtime pianist and fellow Cam Jazzer John Taylor, Where Do We Go From Here?, Kenny Wheeler has ramped up his output, releasing four more albums in the ensuing years. But all of the octogenarian's Cam Jazz recordings have been small ensemble affairs, and though he's collaborated with larger ensembles like Italy's Colours Jazz Orchestra on Nineteen Plus One (Astarte, 2009), it's been far too long since Wheeler released a big band recording solely under his own name—22 years, in fact, when Music for Large & Small Ensembles was released by ECM.

The wait is over. That eight players are back speaks both to their dedication to the music of one of jazz's most important composers of the past six decades, and of Wheeler's faith in their ability to bring his distinctive charts to life. Some—trumpeters Henry Lowther and Derek Watkins—go right back to Wheeler's first leader date, the 1969 Fontana classic Windmill Tilter, though any who follow Wheeler's career will find plenty of familiar faces in this brass-heavy, nineteen-piece big band. Perhaps the most notable newish face is Nineteen Plus One's Diana Torto. Like Wheeler's previous vocalist of choice, Norma Winstone, Torto possesses inestimable chops, but knows when to use them—and when to lay back. Here, her wordless vocals add distinction to the melody of the buoyant waltz-time "Enowena," navigating Wheeler's interval-challenging melody with ease as part of the larger ensemble, and delivering an impressive scat solo that more effectively distances her from Winstone's spare approach for one of The Long Waiting's high points.

Wheeler's writing is immediately recognizable, a kind of gentle melancholy dominating the melodies, even at brighter tempos. Most of The Long Waiting's eight tracks are new, though he does revisit "Coma N.3," a particularly heartbreaking ballad from It Takes Two! (Cam Jazz, 2006), but its larger palette here facilitating a build to more climactic peaks. It Takes Two!'s John Parricelli is not featured on this version, though his warm electric solos on "Enowena" and the fierier "Canter N.1," are just two more reasons why this veteran session guitarist deserves greater recognition. "Canter N.1" and a reprised "Old Ballad" from Kayak (Ah Um, 1992) also feature incendiary and softer solos, respectively, from tenor saxophonist Julian Siegel, whose work with Partisans and his own records including Urban Theme Park (Basho, 2011) have placed him at the vanguard of a younger generation of significant British jazzers.

Wheeler continues to focus solely on flugelhorn these days, but at 82 his technique remains impeccable, his signature leaps into the stratosphere still as accurate—and thrilling—as ever. Based on history and given his age, it's unlikely that another big band recording will be coming from Wheeler in another 22 years (though we can certainly hope). Still, with plenty of other projects yet to come, if The Long Waiting turns out to be the trumpeter's final large ensemble recording, it's as good a big band swan song as anyone could hope for, filled with resonant charts that brim with strong melodies, effervescent solos and a harmonic complexion that could only come from the pen and horn of Kenny Wheeler.