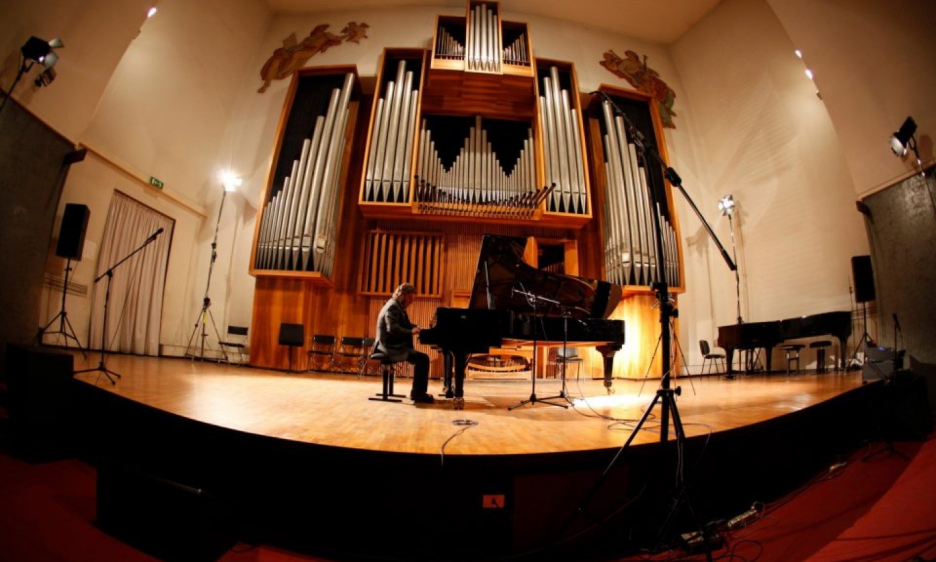 By Duncan Heining
June 17, 2020
Sign in to view read count
Keith Tippett's death on Sunday, 14th June 2020 robbed British and European music of one of its finest talents. The death on any musician of even minor significance often leads many critics reaching for the Thesaurus and tripping over their adjectives in a head-rush of hyperbole. In Keith's case, the simple phrase—"one of music's finest talents"—cuts through the exaggeration and elevation of those less gifted like a blade. The sheer breadth and quality of Keith's work is astounding. I have not come across a single record that he made that is not complete unto itself.

Keith was just seventy-two years old. There must have been so much more music still to come but what a rich legacy he leaves. He was a pianist, an improviser and a composer. More than that he was an architect of sound. He performed solo and in duo with his partner Julie Tippetts, Howard Riley, Stan Tracey and Louis Moholo-Moholo. Along the way there were early albums with the Keith Tippett Sextet, with Ovary Lodge and, later, with the improvising quartet Mujician. And, of course, there was that massive conceit—Centipede, a fifty-piece ensemble that brought together jazz, rock and classical musicians and free improvisers.

Even for the time (1971), Centipede's only release, Septober Energy, seem crazy. How could music and musicians that diverse produce anything of coherence and lucidity? Keith was just twenty-two when he composed this piece. Perhaps there are occasional longueurs. Perhaps it might have benefited from editing. But it remains a brave and exciting work. More than that it revealed Keith's abilities to write not only for jazz but for voices and strings as well.

This is the most important thing to remember when listening to his music. It is as true when performing solo, in duo or with a larger group. It begins with those hands on the keyboard. The architecture of a Keith Tippett solo contains in embryo and predicts perhaps a work for choir, a string or saxophone quartet, his own octet or for the three big bands (Centipede, Ark, Tapestry) he led during his long career.

As a boy, Keith had been a chorister at St. Thomas the Martyr Beckett Church in Bristol, where he was born. When his voice broke, he studied church organ and later played cornet and tenor horn with the Bristol Youth Brass Band. English church music, folk music and the English pastoral and brass band traditions are knit closely together. Though European Art music, rock and the rhythms of South Africa would all become important colours on his palette, Keith was first and foremost a jazz musician. But that was built upon the firm bedrock of those earlier musical experiences. It is my belief that it is that grounding that made him such a fine composer or, as I said earlier, an architect of sound.

But there was another crucial element in Keith Tippett's music and that was his wife, Julie. They called their duo, Couple in Spirit, and this defined them precisely. Partners in life and in music, there was always the sense— whether working together or separately—that the other was present and given expression in their individual performance. That thought makes me even more sad for Julie's loss.

I will not pretend to have known Keith well. We did spend some time together, most memorably at the Sant'anna Arresi Jazz Festival in 2008. I interviewed and wrote about him on several occasions, we met at gigs and spoke on the telephone. I liked him a lot. I found him warm, completely honest and genuine. Even in the parlous world of jazz, one comes across people now and again who are clearly on the make. Keith's ambitions lay solely in making music. Money had little to do with it. One of my favourite personal memories of Keith was of interviewing him in the couple's Gloucestershire cottage (rented not owned) talking in front of a roaring log fire and later eating smoked salmon sandwiches in the kitchen. I can feel the glow of the fire as I type—a little heat cutting through the sadness.

Next year will be Centipede's fiftieth anniversary. How very sad it is that Keith will not be there to celebrate it. Who knows? Perhaps Serious might just find the resources to programme this mighty work for the 2021 London Jazz Festival. All too frequently more fêted in mainland Europe than in Britain, it is the very least Keith deserves.

All About Jazz sends its sincerest condolences to Julie, their children Inca and Luke and their grandchildren.