By Nenad Georgievski
November 3, 2013
Sign in to view read count 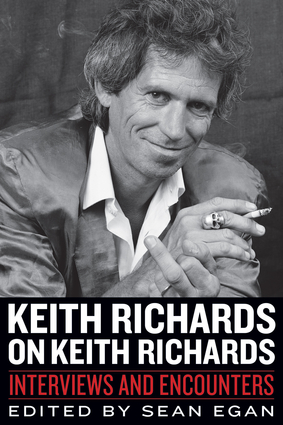 Keith Richards on Keith Richards Interviews and Encounters
Edited by Sean Egan
288 pages
ISBN: 9781613747889
Chicago Review Press
2013
There is an enduring appeal when it comes to the lives of Keith Richards and the other Rolling Stones that has spawned a myriad of biography books throughout the years. But no matter how many biographies and testimonies are published, a whole new avalanche of books are written each new year that again still attracts new readership regardless if the biographers are miles and miles distanced from the inner circles of the band and usually recycle the same old myths and stories. And all those books simply fade away in comparison to firsthand experiences as told by the main protagonists such as Keith Richards with his autobiography and masterpiece Life which won the Norman Mailer Book Prize in 2011.

In recent years there has been an influx of autobiographies and other collections of personal memoirs by distinguished artists that indicates a rise of interest for firsthand experiences, as told by the artists themselves and not by third rate biographers with a taste for tabloid attention. Edited by journalist and writer Sean Egan, Keith Richards on Keith Richards is a hefty collection of interviews, gathering 45 years worth of conversations with Richards. The interviews are probing and reveal an artist with great insight and self-awareness, a student of music, an avid searcher, a comedian, bluesman, libertine, a drug abuser, a rebel and a thinker. Much revered, once reviled, Richards has created some of the most extraordinary work in the history of popular music. For armies of fans, Richards is the heart and soul of the Rolling Stones, a rock and roll renegade who played vicious outlaw music, the soul survivor or the cat with nine lives who fought in the rock and roll wars and survived. No wonder people say that in case of a nuclear holocaust the only things that will survive are Keith Richards with the Rolling Stones and cockroaches. With the Stones celebrating their 50th anniversary and plus, that may even come as true.

Gathering 18 different interviews, some unpublished or in languages other than English, spanning from 1964 to 2011, this volume focuses squarely on eye-opening conversations that chart Richards' development as an artist, a musician, a thinker, public enemy No.1 and a public figure. Brilliant, brazen, engaging, esoteric, reverent, irreverent, ironic—all are qualities that have forged this outlaw, who turns 70 this year, into an unqualified master.

Much like the tone in his autobiography he is quite open about any issue regarding his life and career. Obviously he needs a good provocation in the form of a good question and tells it in the same manner as he sings—naked, straight up, heart on sleeve. He details many memorable scenes, breaking down the angles, the thinking behind many issues. Earnest and wicked, sweet and sarcastic and unsparing, Richards tackles in detail many sore points in the band's history— the death of the band's founder and multi-instrumentalist Brian Jones, the Altamont incident, life under siege and no privacy, the rift between him and Mick Jagger (or the World War III) or the disdain aimed at his partner for accepting the knighthood by the same establishment that tried to put them in jail. There are immensely articulate passages about the miseries of junkiedom and the price of fame.

But when the interviewee turns to music, its then when this collection is at its most insightful and engaging. He gives a detailed account of his love for old blues and rock and roll masters, first attempts in writing songs, glimpses of his creative partnership with Jagger, the 1972 U.S. tour, the recording of Exile on Main Street (Rolling Stones, 1972) in his rental house at Villa Nellcôte in the south of France, the recordings of other albums or solo projects, the art of guitar playing, and it ends with an interview about his famed autobiography which is in the same rank as the Miles Davis' untouchable one.

Naturally, this book will be compared to his autobiography, which it should, to a certain degree, but it gives a more detailed look on certain issues that have happened at the time when these interviews were conducted and Richards talks about them in greater detail here than in his own book. By collecting Richards' most important interviews, Keith Richards on Keith Richards provides a sort of an autobiography of the development of a distinct artistic sensibility. It also gives an account of all the hardship he and his band had to go through and makes an effort to separate the man from the myth.