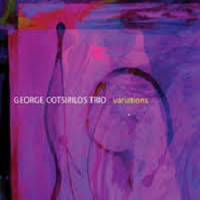 Variations, guitarist George Cotsirilos' sixth recording, is a well-behaved trio affair in keeping with his more recent recordings like Past Present (OA2 Records, 2010). Cotsirilos plays with an acoustically round electric tone that never gets in the way of his fluid lines and well- considered melodies. His seven original compositions all have standards handle to them, in particular, the opener, "A Walk for Ethel," which recalls "I Get a Kick Out of You" crossed with "Scrapple from the Apple." Cotsirilos extends his standards sense with "I Know You Know," which approximates a breezy "I Love You For Sentimental Reasons" and "Lil' Darlin.'"

Cotsirilos imparts a Latin essence to the whole album, one that blooms on the Lins/Martin standard "Doce Presenca" and Robb Fisher's "Sambrosia." These breezy, cool compositions lent well to Cotsirilos' interpretive talents. "Blues for The J Man" is a serpentine minor-key blues that recalls Dizzy Gillespie's "Birks Works." But it is Cotsirilos' interpretation of "But Beautiful" that kills on this collection. His ballad sense is like that of a horn player, attentive to the lyrics as well as the melody. This rendition offers a great comparison to Art Pepper playing the piece, as he so often did. Variations is another solid Cotsirilos offering among a string of previous ones.

A Walk for Ethel; I Know You Know; Doce Presenca; Sambrosia; chimera; 1937; Justin Case; Blues For The J Man; But Beautiful; Madrugadora.