Listening to jazz educators, you would think that jazz started with John Coltrane and Miles Davis.
—Keith Ingham

Pianist Keith Ingham came to New York from England in 1979. While in England, he had been a pianist of choice for touring U.S. greats in Europe, such as trumpet great Roy Eldridge, Henry "Red" Allen, the famous New Orleans trumpet contemporary of Louis Armstrong, and saxophonist Bud Freeman. It was at the suggestion of such greats that Ingham came to America.

By 1985, he had played piano for Benny Goodman, accompanying the master, then in his mid-70s, at a performance in Vermont. Occupying the room next to Goodman in the hotel, Ingham heard him practice. "You knew you were in the presence of a master musician" says Ingham. Goodman liked what he played. "I laid down a solid beat for him.."

Ingham, age 66, says he was fortunate to be around at a time when he was able to play with some jazz legends. He also recorded albums with vocalist Maxine Sullivan (two are being re-released), and Peggy Lee, and has played with legendary jazz guitarist and personality Eddie Condon.

A special passion of Ingham's is what may for some these days pass as "pre-historic jazz." That is, all the jazz before bebop.

"Listening to jazz 'educators,'" says Ingham, "you would think that jazz started with John Coltrane and Miles Davis." He then points out the pivotal figures of Louis Armstrong and Duke Ellington, templates for much of jazz music. He says, "Duke Ellington was completely new. Nothing like what had been heard in music before."

As a pianist, Ingham was keen to discuss some of the piano legends of jazz, in particular the names from the first fifty or sixty years of the music.

James P Johnson was a pianist that Duke Ellington learned from, by placing his hands over the keys raised up and down by the piano rolls he inserted into the player piano machines of the day. Johnson's most influential record was the famous "Carolina Shout." Ingham says Johnson was the best of the stride-style pianists of that era, and was, in the words of Duke Ellington, "pure magic."

Jelly Roll Morton claimed to have invented jazz, yet Ingham says he was "stuck in a ragtime feel. But he was a wonderful composer, with beautifully structured pieces. For example his tune 'The Pearls.'"

Earl "Father" Hines, who partnered with Louis Armstrong on his classic Hot Seven recordings, was a founding pianist of jazz, and Ingham is a fan of his brilliant work with clarinetist Jimmy Noone on the latter's "Apex Club" recordings of 1928.

Willie "The Lion" Smith (usually photographed with his cigar and hat) was influenced by Debussy, says Ingham. "His left hand originates in Chopin's waltzes." On a radio documentary that included one of the famous jazz history Library of Congress recordings, where the Lion was interviewed, Smith reverentially played, for the tape recorder, some early, little known Irving Berlin compositions, demonstrating what was in the air in the second decade of the 1900s. One tune, "Sand Dune," sounds a little like a Chopin miniature.

Ingham also commented on two essentially forgotten Chicago pianists and band leaders of the 1920s, Jimmy Blythe and Tiny Parham. Ingham said that Blythe was a great accompanist. Parham was more of an "oompah musician." In the collaborative melting pot of Chicago in that era both pianists accompanied the famous Johnny Dodds, the Armstrong Hot Five and Hot Seven clarinetist. Ingham says Goodman told him he loved Dodds. "The south side of Chicago was the main center for jazz in the 1920s," he adds. "New York only had Fletcher Henderson."

The 1930s and 1940s were dominated, pianistically, by three pianists: Art Tatum, Fats Waller and Teddy Wilson, says Ingham. Tatum was "everything—a freak." Fats Waller was "essentially a stride pianist, with a powerful left hand and a beautiful touch." And Wilson was the pianist for the Benny Goodman trios and quartets, "so perfect. Al Haig (a pianist for a time with Charlie Parker) adored him. I used to sub for Al, and I played at his wake."

The 1950s saw the rise of "cool jazz," following the bebop revolution. Ingham says of Miles Davis' pianist Red Garland, "(I) love him. You hear one note and you know who it is. A wonderful touch." Ingham says Garland brought a huge repertoire to Miles Davis, for example "You're My Everything" and "If I Were A Bell."

Of Ahmad Jamal, Ingham insists he was "not a cocktail pianist. He says Jamal's bassist Israel Crosby was a great player, as was his drummer of the time, Vernel Fournier. Says Ingham, "I recorded a marvelous double LP with Fournier in the late '80s," released under the names of Ingham and clarinetist Bob Ritmeier as Plays The Music Of Victor Young (Jump Records, 1989).

Noting that Ahmad Jamal throws in quotes from other songs in his playing,. Ingham says, "Oh he loves the quotes, man. He's a master of that. But he did make great music out of a dumpy thing like 'Music Music Music,' if you remember that song."

On Bud Powell: "Love him. Great composer. I would say that not only was he a genius pianist, but his composition was fabulous," says Ingham. "They are marvelous pieces, marvelous structure. The man was a genius. Percussive, and crazy too. He had that element of: you're right on the edge, bordering on the edge. It always comes out with him."

Wynton Kelly, also a famous Miles Davis alumni, was "most swinging," says Ingham. "He was on so many records before he joined Miles. He was from the West Indies. I actually got to see him when I was playing on a ship from England. I came here, and he was playing with Jimmy Cobb and Paul Chambers. That was Miles' rhythm section. They were doing a little thing—I don't know why they were playing it, but they were playing "Surrey With the Fringe On Top" and it was a knockout. I remember that. It was a promotional thing. A friend of mine who worked in Sam Goody's Record store when it was Sam Goody's was an English guy... He had his hear to the ground (about what was going on), and he said 'Come on, they're playing and it's free.' I forget where it was, in a hotel room. They floated on air, those guys... We've lost it all now, we really have. (It's all) anger and ego (now)... Nonsense."

He says those faults apply to all genres of music. "Everything is image now, of course, and it's visual. If you looked like Ella Fitzgerald you wouldn't get a chance to sing (now)... Well , she came up singing on radio, but nobody cared with radio. You couldn't see them."

Ingham has some interesting reflections on the nature of the piano as an instrument.

"You've got 88 keys, and you don't use most of those... not the top and bottom (notes). Classical Pianists, you can tell certain people by their touch, but in general, not. (But in jazz), isn't it amazing how some people can just get a different tone and sound out of that thing? It's an impersonal instrument ... You're not blowing into it. When you touch the piano, there's the mechanical action of the hammers being hit before you actually strike the chord. Bill Evans had a sound, Tommy Flanagan, Hank Jones, Oscar Peterson. It's amazing. Your personality transcends the mechanism of the damn piano. And you're not blowing through it, where it's easy enough to get your own sound."

"It's very interesting how jazz has made the piano, in its way, a very approachable and warm instrument. You can tell the jazz pianist. Each one is different."

"Yes," agrees Ingham. "He was more dramatic and passionate. Spontaneous. Improvised, in a way."

In Rubinstein's autobiography, he says that when he was about 20, if there was a part in a concerto that was very difficult and he couldn't really be bothered playing it, he would hit the sustaining pedal and fake it, and the audience wouldn't know the difference. They would think it was amazing.

"Yes, they're full of tricks," says Ingham. "It's like jazz. You put the pedal down and play rapid triplets and everybody thinks that's fantastic. It's not difficult to do."

Ingham's trio had just played "Mr. PC" from Coltrane's Giant Steps (Atlantic, 1959), to end off the last set. "Yes, I've got a story about 'Giant Steps,'" says the pianist. "Tommy Flanagan was on piano the first time that 'Giant Steps' was played, and he just gives up. I asked him about that. He said, 'I couldn't play that shit, it was flying by so fast. I finally had to just leave it to the bassist.' And you can hear it on the record. But when he came to record his own album of Coltrane pieces, he played it beautifully. But it was one of those things, it was so different."

Ingham says he is not in general familiar with the new jazz pianists. "Duke Ellington said the whole Thing. He said, 'To play jazz, one day, you'll have to come out of a conservatory. You'll have to be classically trained.' And it's probably become true. The problem is, they all sound the same."

Ingham feels jazz education being too narrow now, in effect just a treatise on a few works of Coltrane and Miles Davis, and that's it. "That jazz educator thing fell apart. They didn't get any funding anymore. But they're the ones responsible for making everything the same because it was all they could do. So they told the students the same rubbish." 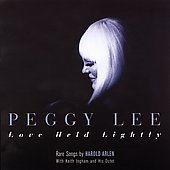 Jazz did not develop by people learning rigid material. "They listened to each other," says Ingham, "and they stole from each other, as the classical guys did."

Ingham's latest recordings include an album with vocalist Sharon Paige of songs with the lyrics of Ned Washington, entitled Love Is The Thing (Man In The Moon, 2008). It includes songs like "I Don't Stand A Ghost Of A Chance With You," "Stella By Starlight" and "The Nearness Of You." He also recorded an album, in 2007, of the music of Joe Marsala, with prominent clarinetist Bobby Gordon, Lower Register: Bobby Gordon Plays Joe Marsala (Arbors, 2007). Ingham wrote the Arrangements.

He has recorded many albums with vocalists, often in a "song book" format. A great example are the albums he recorded with former Cotton Club and 52nd Street singer Maxine Sullivan. "Maxine was great. A couple of them are being re-released," says Ingham. Then, of course, there is the album he recorded with Peggy Lee of hitherto unrecorded Harold Arlen songs, released in 1993 ( Love Held Lightly: Rare Songs By Harold Arlen, recorded in 1989 for Capitol Records).

Given his brilliant playing of a number of Billy Strayhorn songs at a trio gig at Cleopatra's Needle, in New York City, maybe Keith Ingham should record an album of those compositions.

Keith Ingham, Out Of The Past(Sackville Records, 1990)

Harry Allen-Keith Ingham Quintet, Are You Having Any Fun? A Celebration Of The Music Of Sammy Fain (Audiophile, 1990)