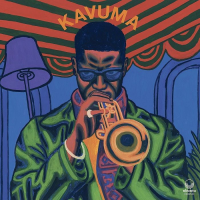 Mark Kavuma may not be well-known yet but, still in his early twenties, he's making waves on the British jazz scene. An alumnus of Trinity Laban Conservatoire of Music & Dance, he's already played two gigs as a guest soloist with Wynton Marsalis and Jazz at Lincoln Center Orchestra, at London's Barbican Centre, on February 20, 2016. Kavuma's compositions are clearly influenced by classic Blue Note albums of the 1950s and 60s, evoking such paragons of hard bop as Art Blakey, Lee Morgan and Horace Silver. Typical of this dynamic approach is the opener "Into The Darkness" with Kavuma evincing a solo of fluid confidence. Another is the equally vibrant "Papa Joe," the ensemble stating the bouncy, memorable head.

An exception to this mood is "Barbar G," a gentle ballad, rich in soulful elegance. Two non-original numbers are included on the album. William Henry Monk's hymn "Abide With Me" is introduced by Kyle Poole's energetic drum solo before a rather more traditional ensemble reading of the tune. There's also a version of the pop song "Carolina Moon" by Joe Burke and Benny Davis, and recorded by Connie Francis in 1958 but here given a reworking of the Thelonius Monk arrangement. Kavuma plays a searing trumpet solo on the bluesy "Modibo," preceded by a Grant Green-esque guitar solo by Artie Zaitz.

The set concludes with the fast-paced, uproarious "Church," named after an East London late-night weekly gig for jazzers. The number is embellished by a delightful tap-dance break from Michela Marino Lerman. Judging by the occasional (muffled) cries of approbation and encouragement from the musicians, picked-up off-mic, everyone had a ball recording Kavuma's debut album and it's another indication that this talented young trumpeter is someone to watch out for because he's going to be big.