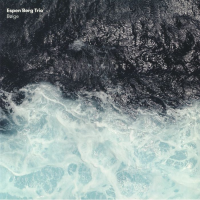 The highest wave ever measured by a fixed installation hit a Norwegian gas transporter in the North Sea. The wave was marked at 25.6 metres high. Award-winning pianist Espen Berg would probably approve such statistics, having named his trio's second album Bølge—the Norwegian name for wave. Berg is also keen to point out the many levels that 'wave' can be perceived from, including the mathematical.

None of which should imply that Bølge needs logical analysis. But it is a demanding listen, full of signals, crests and fluctuations. We also get the sense of a compact trio in full flight. In the way that giant waves are caused when a single wave steals energy from others, so Berg thrives on the vigour of his two partners. Double bassist Bárður Reinert Poulsen is a member of the Faroese Symphony Orchestra and offers rich plummy tones. Drummer Simon Olderskog Albertsen is, like Berg, a graduate from the renowned jazz programme at Norway's University of Science and Technology.

Berg is a masterly pianist, pitching his stall somewhere between the skittish ripples of McCoy Tyner, Dave Brubeck's adventurous metres and the classicism of Andreas Ulvo. Melodic waves rush into a rhythmic whirlpool, amid one swiftly-rolled chord after another.

Bølge opens with "Hounds Of Winter" and its regal intro, before a subtle casting-away of the shackles. In a heartbeat, the tone changes from courtly to frisky, with a lightness of touch to finish. The impulsive "Maetrix" has tingling cymbals and solid chords that soften into dazzling improv. Snappy clapping-rhythms herald "XIII" and its almost-electronic backdrop. Albertsen takes a drum solo here, before Berg rides the piece home on clouds of glory.

The title-track offers a lovely piano motif, almost poppy in its innocent grace. "Tredje" sees Berg take a dizzying romp over the keys as Albertsen urges him onwards. The offbeat flurries of "Cadae" give way to silvery shivers on "For Now," where the slower sections give a sense of uplift, like a relaxed nature-ramble. Poulsen's bass-plucking stays prominent on "Skoddefall," with Berg's own work often absorbed deep in the mix. This is clearly a trio devoid of egos.

The closing number, "Climbing," begins with a carol-like purity then, again, the shifting vibes happen suddenly, seamlessly. This smooth changing of gears makes Bølge a record of constant surprises that defies you to switch off for a second.

The cover artwork depicts a sky-blue tide meeting granite black. Two near-opposites coming together. So, can a music project be both beautiful and mathematical? Those who cannot equate such a thought, might find this wave-powered album has a winning formula.