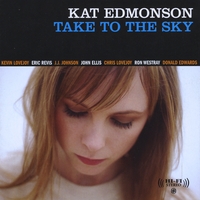 Jazz vocalist Kat Edmonson summed up her musical philosophy best when she told journalist Joey Guerra, "I just think good music is good music." The Austin-based singer's album Take To The Sky draws half of its repertoire from America's most timeless Tin Pan Alley songwriters, including the Gershwins and Cole Porter. The other half of the album draws from a wide range of contemporary popular songwriters, including the Cure and John Lennon.

This strategy of mixing the classic with the modern is not a new approach for jazz vocalists. Cassandra Wilson, for example, has built an impressive career covering songs by compositional innovators from Miles Davis to Bob Dylan. Edmonson's particular stylistic approach is unique and satisfying for two reasons—the high-quality arrangements by pianist Kevin Lovejoy and Edmonson's own quirky synthesis of nymph-like timbre and classic jazz phrasing.

Edmonson's first statement is bold. Though jazz singers have covered the Gershwin standard "Summertime" ad nauseam, she shows why the classic song deserves just one more chance. Lovejoy begins with an ominous Brad Mehldau-inspired piano and bass ostinato in six-eight time. At the second verse, drummer J.J. Johnson (best known for his work with Eric Clapton and John Mayer) adds decisive buoyancy to the band with an Afro-Cuban groove pitting four beats against every three in the piano and bass. The repetitive nature of the instrumentation is the perfect backdrop to introduce Edmonson's stark, whispery vocal style.

Equal parts Billie Holiday and Hacke Bjorksten, it is Edmonson's distinctive coyness that marks her as a vocalist of 2009, not merely a re-do of the 1930s. For the most part, Edmonson holds true to the original melodies of the jazz standards, including "Night and Day." Here, Lovejoy channels inspiration from soul music with a driving four-on-the-floor groove complete with tambourine. Edmonson's charming delivery successfully disguises the fact that the lyrics are more than 70 years old.

In fact, she is so convincing that one might easily mistake her cover of Henry Mancini and Johnny Mercer's "Charade" as one of Rufus Wainwright's latest laments.

Edmonson and Lovejoy can easily dress up classic jazz in modern pop clothing, but that clothing must be reversible. One of the most successful pop-to-jazz conversions on the album is "Lovefool," a song best known for its performance by the Cardigans and subsequent inclusion on the 1996 Romeo and Juliet film soundtrack. Lovejoy's arrangement pairs Edmonson's voice with an austere brass accompaniment on each verse, making his switch to a tongue-in-cheek salsa montuno for the choruses a delightful surprise.

Edmonson is not one to pursue the vocal improvisations of the classic jazz singers, but it is her subtlety that is most appreciated here. The band, however, provides numerous tasteful moments of improvisational depth to the album. Reed player John Ellis plays a lovely, if brief, tenor saxophone solo on Edmonson's inspired bossa nova cover of the Cure's "Just Like Heaven." Likewise, Ellis's bass clarinet musings on "Charade" prove the weighty jazz roots of the band members without forcing unnecessary harmonic complexity upon what is meant to be an understated aesthetic. One of the gems of the album is made possible by the communication between the trio of Lovejoy, Revis and Johnson: the standard "Angel Eyes" is captivating.

The only song that comes close to conventionality is Carole King's "One Fine Day," heard here as a loping ballad. But, even then, it does not disappoint. The same is true of the soft ballad performance of John Lennon's "(Just Like) Starting Over." Edmonson delivers each lyrical line with such sensitivity and thoughtfulness as to rival any classic jazz songstress. The final piece (a hidden track 10) is a pitch-perfect unaccompanied performance by Edmonson of "Spring Can Really Hang You Up the Most."

Though the album certainly straddles numerous stylistic divides, there is one category that fits without question—it is just "good music."

Summertime; Just Like Heaven; Night and Day; Charade; Lovefool; Angel Eyes; Just One of Those Things; One Fine Day; (Just Like) Starting Over.

is a jazz vocalist, musicologist, voice teacher and freelance editor