By KARL ACKERMANN
June 4, 2019
Sign in to view read count 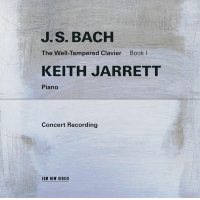 Keith Jarrett and Johann Sebastian Bach go back a long way. Between 1722 and 1742, Bach composed two sets of preludes and fugues in all twenty-four major and minor keys, written for keyboard; the clavier was—at that time—a broad description taking in the harpsichord, clavichord, and organ. The Well-Tempered Clavier—Book I is a live version of Jarrett's 1988 ECM studio release of the same name. Jarrett followed with Book II (2000), another in a series of six Bach recordings.

Within a month of Jarrett's having studio-recorded The Well-Tempered Clavier—Book I, in 1987, he performed the pieces in a solo concert at the Troy Savings Bank Music Hall, in upstate Rensselaer County, New York. That historic hall—completed in 1875—features a performance area over one-hundred feet long, seventy feet wide and sixty-one feet high, an acoustic marvel. It suits Jarrett well in this performance, captured on a two-CD set.

Jarrett's reading of Bach's compositions is crystalline, and without embellishment. As he has said often of his interpretations of classical masters, the composer's music speaks for itself and requires no help on his part. Just the same, it is the pianist who brings this music to life. Jarrett's perfect pitch and technical skills overcome the challenge of taking music written for harpsichord and containing it within its intended perimeters, using the piano. He channels Bach through each of the forty-seven pieces, the only shading coming from the subtleties of the keyboard.

Jarrett has been performing, and recording, classical music since early in his solo career; rather than being a "jazz artist" playing classical music, his body of work proves that his art is where he discovers it. Jarrett has interpreted the works of Mozart, Händel, Shostakovich, Barber, and Bartok and, with each, he plays with a lack of consciousness. This live version of The Well-Tempered Clavier—Book I should appeal to anyone who appreciates a great musician.