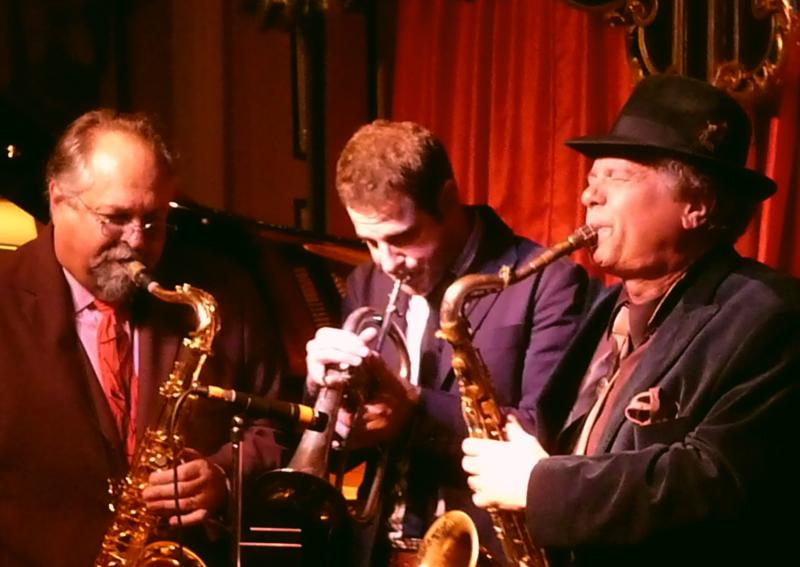 Late into the third set of his homecoming gig with family and friends at Nighttown, saxophonist Joe Lovano took to the mike to remind all in attendance that "Cleveland has always had a creative music scene goin' on." It felt part pep talk, part classic eureka moment of the chronically pessimistic Clevelander, sprung this night from the combustive heat of a wonderfully overstuffed room: "Wait, wow, this is our city?"

That such sentiment passed through the lips of Lovano, one of the recognized kings of the jazz world, brought him home completely. Not that the opening two sets had left much doubt about how tightly Cleveland roots nestled his heart. Lovano opened the night accompanied by his younger brother, Anthony Lovano, on drums and Anthony's mate from The Midnight Sons, bassist Jeff Anastasia. The trio ran through the recently composed (and recently recorded, as Joe intriguing let drop a couple of times) "Northeast Ohio Suite," a piece in six movements, covering the broader Cleveland landscape and the Lovano family's life within it: Euclid, 10508 Kinsman, Painesville.

Switching between tenor and soprano saxophones, Lovano pitched mournful sounds of the open, bitter street, his tones climbing with a cold-sweated insistence over the steady, pulsing groove laid down by Anthony and Anastasia. Joe whirled about as a snake charmer in spots, willing the sound—the cry of the Cleveland boy on his way up—into soulful, singing tenor and, finally, swooping, exultant soprano akin to a John Coltrane praise song. Indeed, it was a love supreme for Lovano's original stomping grounds, complete with the hollow middles and empty promises that accompanied the thrills of the thriving, thumping city—and music scene—of his youth.

Lovano then stepped into that past, inviting childhood mate Ron Smith to take over on electric bass—Smith who, along with drummer Carmen Castaldi, had ventured with Lovano to the Berklee College of Music in the early '70s. Now, they visited the slow, drifting soul of Smith's "For Old Time's Sake," Lovano's tenor coolly maudlin over the whisper of Anthony's brushes as Smith skipped and slid the wide, low reaches of his bass. The free-bop propulsion of a number called "Incognito," punctuated by an impassioned drum break from Anthony, then took the trio into another soprano praise piece, this time singing of the hardscrabble Collinwood, which butts up against Lake Erie on Cleveland's East side—an area that has emerged over the preceding decade as a music and arts hub.

The second and third sets opened the door for a revolving cast of characters to squeeze on to the bandstand, wail away, exchange licks and good cheer. While a lively, holiday atmosphere prevailed, marked by hugs and good-natured ribbing from old friends, the music remained invigorating and inventive. Bassist Dave Morgan, pianist David Thomas and the aforementioned drummer Castaldi made up the rhythm section for set two. Lovano's wife, singer Judi Silvano, also stepped to the mike for a rousing, Latin-beat take on "I Remember April," followed by a hard-swinging run through "Mood Indigo." Each number offered extended full-throttled choruses from Joe, piano solos from Thomas that crashed a gaggle of block chords into Jenga-like crescendos, and ample trading with Castaldi and percussionist Jamey Haddad, who snuck on stage sometime during "Indigo." Lovano's uncle, Carl, raised his trumpet for "Body and Soul" and "Bye, Bye Blackbird," his horn fully fired by the second tune as he traded lines of molten bop with his nephew.

Set three was for the friends. Morgan and Thomas remained, while swing drummer Val Kent took over the stool behind the kit. One by one the cats from Lovano's youth sauntered on stage to blow the Cleveland music scene from the late '60s/early '70s back to rip-roaring life. Saxophonist Ernie Krivda, the jazz dandy, countered Lovano's angular, slightly atonal lead on "Hot House," with his trademark hard-edged bop. And trumpeter Kenny Davis and vibraphonist Ron Busch chimed in on "Stella by Starlight."

To close, Lovano invited the current generation up in the person of trumpeter Dominick Farinacci, whose full-throated flugelhorn tear through the opening of "Oleo" was a wake-up call for any who know him only from the tender ballads favored on his recordings. He sounded every bit the titan as he joined Lovano and Krivda (and perhaps the ghost of Ayler?) in a glorious rabble of metal noise to bring matters to a heady close. Yes Joe, the scene in Cleveland indeed goes on.