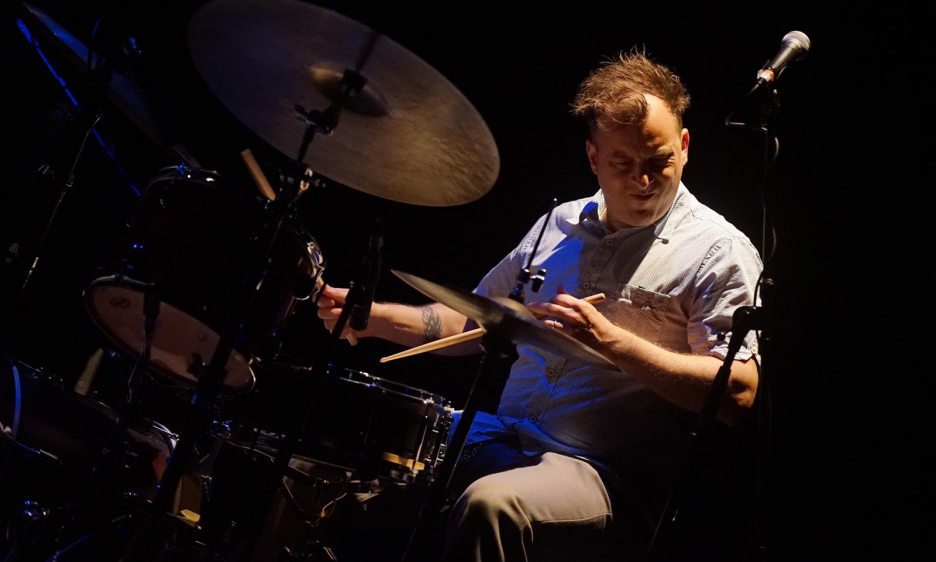 Jochen Rückert's career has clearly shifted up a gear. "I recently joined the class of professional artists that always travels with a permanent marker," the drummer tells the audience at Hong Kong Arts Centre. "It now lives right there in my stick bag," he guffaws jovially, with a warm spirit and muddled accent which reveals both his German upbringing and the past two decades he has spent in New York City as a naturalized American.

I hope he packed a spare, because by the end of his quartet's whistle-stop, weeklong tour of Asia, which also features dates in Japan, Mainland China and South Korea, this sticksman's autographic flair will have come on no end.

Outside, Rückert signed copies of his four previous quartet recordings, of which 2014's We Make The Rules features the same line-up seen onstage: Mark Turner on tenor, Lage Lund on guitar and bassist Matt Penman. Only Turner—best known for his work with Brad Mehldau's rhythm section bassist Larry Grenadier and drummer Jeff Ballard—was called for 2016's follow-up, Charm Offensive. But expect this delightfully incongruous configuration on board for Rückert's next effort as leader, with much of the set devoted to new material evolving in real time: As the contemplative opener "People Person" reached its cresting post-bop climax, I wished Hong Kong was last, not first, on this tour, to see what shifting hues might be employed after a week's work-shopping.

A studied abstraction pervaded this group's generally mellow-ish sound-painting, a deceptive use of space and rhythm, jagged lines and delicate splurges dotted a blank background. Littered with the dumb-footing time signature shifts only a drummer would concoct, it's tempting to think of the weather: A wintery aesthetic was defined by Lund, who plucked and picked—but never strummed—shimmering guitar harmonies with a pianist's pacing, but uncluttered restraint, leaving large expanses of canvas open for Rückert's dotty, studied stick-work.

Brooding, moody standouts "Pretty From Afar" and "The Alarmists" carried the crystalline, meditative mood you might associate with the ECM stable, but with a darker undertow and tighter rhythmic pulse asserted in both Rückert and Penman's restless rumbling. Playing sparingly, Turner colored this monochrome frostiness in, spurting Rückert's asymmetrical melodies with deft conviction, but also brought a busier boppish growl to his longer solo stretches. It's too easy and too tempting to invoke national stereotypes at this juncture: Norwegian Lund searched and soundscaped in the Nordic fashion, never too concerned with a tidy end to his musical meanders, while American Turner slurreds and blurred with a driving intent and ballsy execution, before wandering off the stage. Caught between European roots and American roadwork, Rückert strafed cross-continental identities, while his New Zealand-born bassist Penman fought to fit in and follow the flow. In reality, this unsung hero held it all together.

Muscles were flexed on the fusion-flavored "Parasitosis" and, most compellingly, cerebral closer "Eggshells"—the only time Rückert took a "proper" solo, and the launch-pad for Turner's most barreling workout. But whatever the tempo the music remained both dreamy and demanding: It was frustrating yet amusing to watch its topographical contours mirrored in the pair of inebriated expats seated in front of me—who, perhaps regretting those happy hour drinks, took turns to judder limbs excitedly and stare off into the distance, dumbfounded. Their mix of wonder, bemusement and befuddlement found a happy equilibrium in encore "This is Not Me," which lumberingly staggered between face-slapping changes with a pharmaceutical fervor which Rückert wryly attributed to a "somewhat increased intake of drugs since the presidential election of 2016."