By Forrest Dylan Bryant
February 21, 2005
Sign in to view read count
It was supposed to be a happy occasion.
When Yoshi's jazz club in Oakland booked Jimmy Smith and Joey DeFrancesco for a five-night engagement (February 16-20), it was supposed to be the first stop on a triumphal inter-generational tour to promote Legacy , the two organists' first album-length team-up. But just one week before the gig, Smith passed away in his sleep at the age of 76. What do you do when a legend dies — or in DeFrancesco's case, a lifelong mentor and friend? You pay tribute to his memory in the most respectful way possible. In the best show-biz tradition, the show went on.

The setting was poignant even before the lights dimmed for the first set on Wednesday night. Two Hammond B-3 organs dominated the front of the stage, solid blocks of wood anchoring either end of the platform like twin sentinels. One was unadorned; the other — Jimmy's personal instrument for 36 years — stood as a silent tribute to its former owner, with a glass of red wine, a cigarette, and flowers resting on top.

When DeFrancesco came out with the rest of his trio, after allowing the stage to sit empty for a minute, he looked wistfully at the other end of the stage. "This is really hard for me," he said, recalling a lifetime spent under Smith's spell, and a personal relationship that began in childhood. "But instead of saying goodbye to Jimmy, we're saying hello. And we'd like Jimmy to start it for us." With that, a spirited recording of Smith playing solo led into a joyous rendition of "Legacy," the title song from the album (later in the set, another Smith recording would be allowed to play in its entirety).

If the intent of "Legacy"? was to loft Smith into jazz heaven on wings of fiery soul, DeFrancesco succeeded brilliantly. Launching immediately into an intense groove, DeFrancesco gave an early solo to guitarist Jake Langley. Langley's greasy break, a cool-toned but slippery excursion full of high notes, evoked Smith's famous collaboration with Wes Montgomery and dovetailed nicely with DeFrancesco's own burning play. For his own part, DeFrancesco tossed a scrambled mosaic of musical colors into the mix, squirming and grimacing in his seat as his playing grew ever more concentrated, powerful, and celebratory. Drummer Byron Landham, like Smith and DeFrancesco a product of the Philadelphia jazz scene, took a similar tack, building up to a thunderous bass/cymbal roll while staying remarkably in-the-pocket.

DeFrancesco's playful side emerged in "Love For Sale," setting a tone of fun and frolic that would sustain the rest of the 90-minute set. Starting with a relaxed boogaloo beat over some New Orleans-style drumming from Landham, with stabbing accents marking the start of his phrases, DeFrancesco gradually transformed the piece into a double-time dance party, his almost cubist organ solo dissolving into sweeping runs and quotes from Smith's hits of the 1960s. 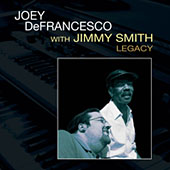 Saxophonist James Moody also appears on the Legacy album, and he provided the final piece of the puzzle by sitting in on four tunes. On Sonny Stitt's "Eternal Triangle," Moody offered up a swinging solo full of small, tumbling, phrases, which DeFrancesco mimicked impishly before setting off in his own direction, jabbing and strutting like a funky rooster.

Moody turned the set into a full-blown comedy act in "Benny's From Heaven," a masterful bit of bebop storytelling replete with sound effects and running commentary (the tune, for those who haven't heard it, twists "Pennies From Heaven" into a hilarious explanation for a baby born out of wedlock). With Moody wisecracking and mooning through the remainder of the set, DeFrancesco's frequent stares at the silent organ across the way began to change. Instead of the melancholy looks that were seen earlier in the evening, he was smiling, laughing, and swinging.

It was supposed to be a happy occasion. And believe it or not, it was.

Visit Joey DeFrancesco on the web.