BY ELLIOTT SIMON
February 21, 2005
Sign in to view read count 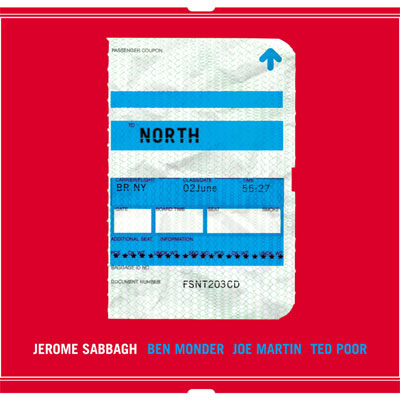 Jerome Sabbagh brought his tenor to the Big Apple from France a few years ago and quickly gelled with some of NYC's best young progressive players. On his debut as a leader, North , Sabbagh explores a potpourri of styles with a decidedly modern mindset to offer up an original program of newly composed music. His quartet includes the technically talented triumvirate of bassist and labelmate Joe Martin, phenomenal guitarist Ben Monder, and young drummer Ted Poor.

Things begin with a fast-paced trip "North" that seemingly starts down south with a breezy Latin feel courtesy of Poor's cymbal work and Monder's comps. The muted guitar and full fledged tenor sound of the ballad "Follow the Light" and straight-ahead jazz of "Every Now and Then" contrast with the open expansiveness of the disc's most "out" number, "Indian Song." Sabbagh and Monder pair up nicely for crisp in tandem playing on the melodious "Extatik Eztetik" before they, along with Martin and Poor, each in turn improvisationally investigate. All then embark on a rhythmically interesting "Trip" courtesy of some masterful modern drumming that becomes a willing vehicle for an improv that touches on blues/jazz and rock.

Poor and Martin are again right there with the quirkily plodding rhythm of "Sick Leo," who is more than cured by a healthy dose of tender tenor tonic followed by some bluesy convulsive jolts of electric guitar. The awe-inspiring mood of "Hymn" is the appropriately solemn setting for Sabbagh to sing praise with a lovely tenoric line and for Monder to shout his own hosanna with sustained plucked notes. North shows that Sabbagh and his quartet can cover a lot of ground in a multitude of directions.

North, Follow The Light, Extatik Eztetik, Indian Song, Sick Leo, Trip, Hymn, Every Now And Then, Not Quite Blue.