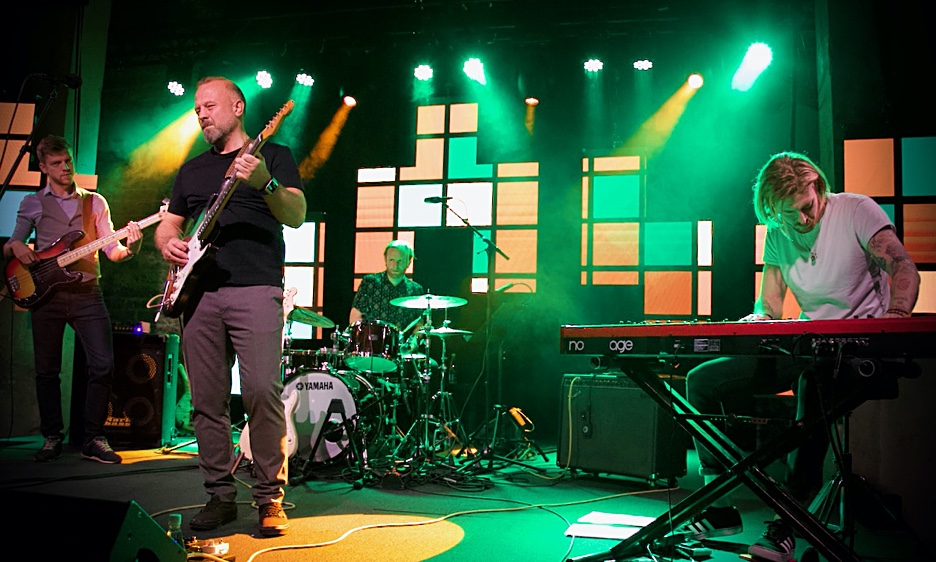 In this year of cancellations and postponements, the Jazzkaar festival opted to jump from April to October, successfully presenting a shorter version that nevertheless managed to include between four and six sets on most of its days. Giant-size American artists were unavoidably absent, but Jazzkaar still drew from beyond Estonian borders, inviting artists from Norway, Sweden, Finland and Germany. In Estonia, virus-testing at Tallinn Airport promises results well within 24 hours.

This was an opportunity to savour the indigenous Estonian scene, with most of its key artists present, often armed with new repertoires or fresh band rosters. It also meant that there were more than the usual number of blandly mainstream pop acts on show, but there was still a balancing amount of the harder sounds, whether jazz, blues, electronic or 'atmospheric moderne.' There were a pair of sensitive duos on show, firstly with pianist Kristjan Randalu and guitarist Vaiko Eplik, and then a pairing of upright bass and cello, courtesy of Peedu Kass and Theodor Sink.

ECM and BMC recording artist Randalu is usually architecturally sound, but Eplik added an unpleasantly high-ranging vocal element, and was preferable when he stuck to guitar. The songs had a strong odour of Eurovision contesting, but Eplik issued better sonics when he fed his vocals through a harsher spread of effects pedals, lending a rougher texture. The two have been collaborating since 2010, and this set combined older songs, re-worked, with newer numbers, all given the 2020 treatment, to even out the sound-stage.

The interaction between Kass and Sink was much more successful, operating in a mournful chamber of resonant string timbres, and continuing with around 45 minutes of sensitively controlled interplay, in a very dimly-lit blueness. The duo operated with various permutations of expressive bowing and plucking, unspooling a filmic theme, exploring memories of Ryuichi Sakamoto and limned images of George Frideric Handel's "Sarabande," as used in Stanley Kubrick's Barry Lyndon movie.

Jazzkaar had a thread of directly powering hardline jazz combos on offer, refreshingly rooted in either hard bop, melodic landscaping or modern fusion. The Jason Hunter Group is led by a trumpeter from Los Angeles, but now living long-term in Estonia. It's a six-piece that also includes saxophonist Aleksander Paal (one of this land's best reedsmen) and bassman Kass again, this time in one of his most surprisingly straight-ahead settings, along with piano, drums and percussion. A sprightly slickness of delivery possessed a cutting bite, not least from the leader's trumpet lines, as Hunter and Paal tossed each other rapid spoutings of expression.

There was also a beneficial relationship between the drums and percussion of Ahto Abner and Francois Archanjo throughout the set. Kenny Dorham's "Lotus Blossom" was followed by Hunter's own "On The Fly," its freeness fanfare funk specially prepared for this gig. Paal delivered a solo with the funk-bop vibration of David Sanborn, making the gathering feel good during the plague. Hunter switched to flugelhorn for his new original "Peacekeeper," its John Carpenter-esque piano figure blended with a Latin feel, then "Vitamin Free" had a heavier funk aura, fuelled by its composer's fiery solo. Paal featured on "Lover Man," offering an extended and elaborate solo, imbued with a heightened degree of sensitivity, then the set concluded with "Samba Furioso," which didn't sound much like a samba, but still drove its way home funkily. Hunter's set displayed his individual soloing prowess, the skills of his tightly-locked band, plus the substance of his compositional abilities.

Operating on an airy level, above Hunter's gutsy jazz rollin,' the drummer Ramuel Tafenau's style grew more out of 1970s or even '80s fusion, with a painterly palette, layered and subtly toughened. He's another rising figure on the Estonian scene, but still managing to surround himself with the likes of bassist Mihkel Mälgand and keyboardist Joel Remmel. The line-up also featured guitarists Kalle Pilli and Johannes Laas, the latter guesting, plus a pair of extra horn players, Allan Järve (flugel) and Tobias Tammearu (tenor saxophone). Tafenau's tunes have open appeal, capitalising on a mix of acoustic and electric guitar parts during "Chapter One." As if the official guests weren't sufficient, Reigo Ahven came up to add percussion. He's the most visible owner of Philly Joe's Jazz Bar, Tallinn's chief basement den of groove, and a fine rhythmatist to boot. Tafenau has a knack of penning memorable compositions, but he still stirred up some substantial patterns on the drums. Much of the out-front soloing was tackled by the guitars, eventually doubling on electric axes, as well as Tammearu establishing several stretches of powered tenor progression.

The next evening's late night set brought a grandiose release of energy. The large ensemble JT Conception sound stronger each year, since their formation in 2015, as they evolve their frontline spread of horns. Led by bassist Janno Trump (he felt a duty to change the band name in recent years), Jason Hunter appeared once more, flanked by another trumpeter, plus trombone, tenor and baritone saxophones. The bold line-up was completed by guitar, keyboards, drums and percussion. Initially, they all made a slow trawl, with some heavy-breathing organ seepage, revealing a well-drilled powerblast slickness, although still allowing pause for reflective spaces. Sticksman Dmitri Nikolajevski was imprisoned behind a large perspex screen, presumably for sonic rather than virus reasons. The Conception made bigger funk steps, tighter than ever, despite touching too much on jazz-funk, at times. Keio Vutt's baritone took advantage of a revealing pause to take a sturdy solo, before the entire crew tipped in heavily again. Finishing after midnight, the Conception provided a blow-out end to the evening.

A knowledge of Estonian pop history would have enhanced appreciation of the next set, but ultimately it shone out on its own terms, even to the uninitiated. The singers Ivi Rausi and Laura Põldvere set out to interpret the repertoire of Uno Naissoo, who died in 1980. The spread of songs tackled during this gig possessed an authentic 1960s vivacity, lent a stylistic zing that prompted images of a swinging psychedelic froth, filled with coolster organ solos and twanging guitar outbreaks, courtesy of Raun Juurikas and Jaan Jaanson. Naissoo's background was in jazz, but this groovin' set-list concentrated on his strutting loungecore pop stylings.

The singers faced off with each other, engaging in a classic duet dialogue, like a kind of retro-rap pairing, then operating as solo singers, as each left the stage in turn, delivering solo sets-within-a-set. When Põldvere returned, she sang in duo with Juurikas, who circulated cosmic sounds around the stage. She could sing in an incredibly low range, when required, and was a highly imaginative interpretive dancer throughout, harnessing those much needed '60s moves. Then, Rausi came back onstage for her own duo, with bassist Ara Aralyan, followed by an almost-full-band song, minus the keyboards. All artists were onstage for the climactic stretch, with Põldvere sporting a tie-dye ensemble, having switched from her already striking crimson dress and headscarf. There was a psychedelic pop number to match!

Placed almost at the end of the festival, there was a surprise storming by a blues guitarist, the blues not being a musical form that often appears at Jazzkaar. Your scribe wasn't familiar with Raul Ukareda, during previous Tallinn visits, but he's apparently one of Estonia's prime blues beings. He certainly frazzled the audience with a 50th anniversary focus on the Band Of Gypsys Jimi Hendrix album, which featured the post-Experience line-up of Billy Cox (bass) and Buddy Miles (drums). This was an inspired choice, as most Hendrix homages tend to focus on a small clutch of earlier, and better-known songs, such as "Voodoo Chile," "Purple Haze," "Foxy Lady" and Bob Dylan's "All Along The Watchtower." Ukareda was also born in 1970, so this gig celebrated his 50th birthday, pleasing all symmetry-lovers!

The Gypsys album had an increased funk base, although still populated by frazzling guitar solos and hooking tunes, particularly on "Machine Gun" and "Power To Love." Janno Trump was back, on bass, and Ukareda was also joined by drummer Kaspar Kalluste and keyboardist René Puura, the latter making an exceptional soloing foil, with his extended note-mangling excursions, boasting a dirtily overloaded organ/clavinet sound. Ukareda replied with a similar level of gutsiness, but neither of them dawdled too long for solos, keeping them tight and cutting, soon returning to the drive of each song. It's important to note that Ukareda made the choice of playing the entire Hendrix album as an instrumental, thereby lending the flexibility of an extended jazz improvisation. The execution was exceptional, but Ukareda had made a fine start with the foundation concept, allowing the audience to recall one of the less-played Hendrix platters from their collections. Ultimately, Ukareda did dip back further, with "Purple Haze" as an encore, as well as a notable quote from "3rd Stone From The Sun." This was one of Jazzkaar's outstanding performances, and a brilliant way to climax the festival, as a one-off gig, inhabiting its own night.