Nick Storring: My Magic Dreams Have Lost Their Spell 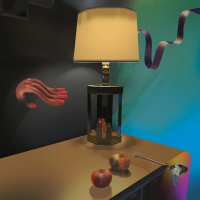 Now here is a strange one. My Magic Dreams Have Lost Their Spell was conceived and composed by Toronto-based multi-instrumentalist Nick Storring as a homage to Roberta Flack. But it contains none of her tunes, not even snatches of them. Instead Storring, a sonic sorcerer who is also a fully paid-up Flack connoisseur, has taken phrases from her lyrics and used them as the titles for six deeply evocative, multi-multi-multi-layered instrumentals, which on occasion summon up emotions which have nothing to do with those of the source material.

The emotions in question are in the main to do with lost love, melancholy and lamentation. The album is Romantic with a capital R, Lush with a capital L—and Disorientating with a capital D. Storring appears to have used relatively little electronic wizardry after the event. The strangeness comes instead from the myriad off-the-wall juxtapositions of sound he conjures from his epic collection of plucked, bowed, struck, stroked and strummed instruments (see below, and if you think you heard a kora in there, too, you are not alone).

The Disorientation starts with the sleeve art (are those objects floating above the table top or resting on it?) and is mostly benign. Unexpected may be a more accurate description than Disorientating. But on track three, "Tonight There'll Be No Distance Between Us," and to a lesser extent on track four, "What A Made-Up Mind Can Do," it is, at least on the first time out of the box, going on Plain Frightening. Storring achieves this not by anything as crude as discordancy or high volume or electronically induced ugliness, but as elsewhere on the album through sonic sleight of hand and the element of surprise.

My Magic Dreams Have Lost Their Spell is Storring's sixth full-length album and was composed, performed, recorded and mixed by him at home between 2014 and 2018. It was funded by a Toronto Arts Council Grant for Music Creators/Composers and it was money well spent.

Tides That Defeat Identity; Pretending You And I; Tonight There’ll Be No Distance Between Us; What A Made-Up Mind Can Do; Now Neither One Of Us Is Breaking; My Magic Dreams Have Lost Their Spell.