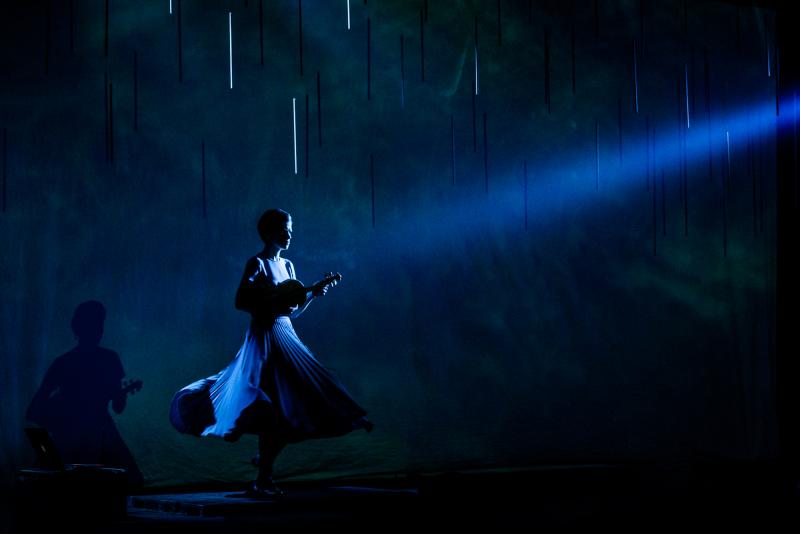 The Jazzkaar festival has been an annual event in Tallinn, Estonia, since 1990, when Soviet dominance was crumbling. Its roots lie in the original 1966 and '67 jazz festivals, before these were banned by those Russian occupiers. Surely the presence of honorary hippie Charles Lloyd, on a ground-breaking Eastern Bloc tour might have been a factor? Jazzkaar's artistic director Anne Erm was involved in those first two 1960s festivals, and has continued her influential role until the present day.

Tallinn is a peaceful, scenic city, nestled next to Russia, at the edge of the Baltic Sea. Its Old Town is a strong attraction for tourists, but the festival itself inhabits the cultural centre of Telliskivi Creative City, a converted factory site, populated by arty bars and cafés. This is only the second year that Jazzkaar has inhabited this complex. Most of the gigs during the festival's 10-days take place here, alternating between the larger (Vaba Lava) and smaller (Punane Maja) stages, in adjacent buildings.

The majority of artists hailed from the USA and Estonia itself, but there were also individual representatives from the UK, Norway, Russia, Cuba, Lebanon and Germany. A particular joy of Jazzkaar is the contrast between global stars and indigenous acts, unfamiliar to most outsiders. So far, Estonian jazz is nowhere near as well-travelled as, for instance, the heavily-exported artists of Norway.

A couple of UK acts took care of the electronically-orientated groove-pulsation zones, with Hidden Orchestra appearing late on the opening night, led by bassist and knob-twiddler Joe Acheson. They surely played beyond their allotted set-length as sloping beats gathered the crowd nearer, sinking into a seductive stream of electro-acoustic marrying, with violinist Poppy Ackroyd bringing unlikely tones to the spread. If the Hidden folks were sneaky in their audience wooing, keyboardist Mark De Clive-Lowe opted for a more bombastic attack, his current largely London-based Church band being the hardest he's ever gathered together. Sometimes, this Los Angeles-dwelling New Zealander can err on the side of mainstream soul or funk, too obviously aiming for crossover success, but with saxophonist and flautist Finn Peters prominently featured, De Clive-Lowe is spotlighting a groove toughness that sheds any lightness, aiming to gore the deep guts. His choice of Tawiah as singer also lends an edge to the proceedings, with her understated, slinky syllable-tripping avoiding any soul-hysterics. This was another extended set, but the Church combo were possessed by a gripping urgency, quaking under their own momentum.

Another festival highlight arrived early, on its second day. Keyboardist Bachar Mar-Khalifé is Lebanese, but lives in Paris, and he's the son of renowned oud maestro Marcel Khalifé. Playing with his bass and drums trio, Mar-Khalifé might be refining the new genre of Pomp Arabic, like unto a magnificent mélange of Queen and Hot Chip (or Hot Cheb?), pillaging from metal, reggae, and Algerian rai, concocting an absurdly full-on Middle Eastern electro-disco stomp. His synthesiser spirals suggested the finest hard-cheese distortions of prime-vintage rai music, overloading until reaching a sharp abyss, then dropping down into a delicate acoustic piano sequence. The mood crept from sombre to kitschy, with great taste, Mar-Khalifé's vocal prowess suited to the negotiation of both extremes.

On the festival's third day, the Sunday afternoon found multiple spaces in the Telliskivi centre opening their portals to present a sequence of free-admission shows. There was a particularly enjoyable twin-bass session in a bicycle shop, with Taavo Remmel and his son Heikko, responding to each other with a sensitivity and joy not witnessed in so many families. The space was a perfect size to enfold their intimate resonances. The climax of this small-set afternoon was an altogether grander performance on the main stage. Singer and, to a lesser extent, guitarist Marten Kuningas paid tribute to the departed David Bowie, assisted by a specially-formed outfit Miljardid. It's a knife-edge in music, between the 'tribute band' concept of rock, and the 'repertoire interpretation' of jazz, but as the decades pass, it's getting possible to play old rock'n'roll chestnuts without dressing up in the garb of their creators. So, Kuningas gave the Bowie songs his own slant, not wildly diverging in delivery, but certainly not attempting to ape their creator. If anything, he was closer to a mixture of Bryan Ferry and Nick Cave in his on-stage persona. The sure-poised Kuningas was ably flanked by the sophisticatedly gnashing guitars of Raul Ojamaa and Erki Pärnoja, perpetually scaling each others heights, in connectively competitive fashion. The song-list was primarily torn from the Ziggy Stardust period, but there were a few earlier and later inserts. A particular mark was made by "Stay," from 1976's Station To Station album, a lesser-heard funk accumulator, with Kuningas and company knitted together for a tightly twitching ride.

Living in a completely contrasting firmament, the German pianist Lambert favours quietness, calm and anonymity. This could be a piano trio, but these three (Lambert is joined by clarinet and trombone) don't follow the jazz pattern for such a set-up. The horns riff in the faintest, most shadowy manner possible, whilst Lambert ponders the keys in from of him, searching for likely melodies of mordant introversion. All three players wear elaborately-horned masks, which initially seems at odds with their musical nature, prompting a negative reaction, a suspicion that they're covering up some kind of personality deficiency. When Lambert talks, he confirms that this might be the case, his deadpan observations creating yet another aspect, one of dark humour. At times, his rambling introductions were superior to the following compositions. Despite any lingering uncertainties, Lambert and his horned-buddies possess enough substance to leave the audience feeling curious, and perhaps being open to a future gig-experience with these mystical masked ones.

In the context of Jazzkaar, the sudden appearance of an extroverted American could be quite startling. New York singer José James immediately connected with the crowd, all seats having been removed for this 9pm set. It was a sound tactic, transforming the atmosphere from the earlier evening seated shows, growing into a dance-orientated climax to each night. James usually delivers strong performances, but this set caught him in markedly enthusiastic shape, his vocal delivery always improved by the looser syllable-push that complements such a heated state.

On the last Friday of the festival, a 10 Years Of Jazz Awards set provided a showcase for the Estonian artists who had won the Jazzkaar votes over those years, united in a large ensemble that changed its shape and emphasis as each player hosted their own tune-selection. Bassman Taavo Remmel turned up again, joined by singer/pianist Kadri Voorand, guitarist Jaak Sooäär and one of this year's freshly-anointed winners, saxophonist Maria Faust. Sooäär led the opening quartet in an angular post-prog riffer, duelling with Raivo Tafenau's tenor saxophone lines. Voorand's versatility shone through during her various appearances, but she was brightest during her own section, matching voice to piano, looping a folksy refrain, tingling on xylophone, then layering up further vocal parts. Her melding of vocal, electronic, piano and acoustic permutations has a deftness that unites all the elements into a single Voorand-sound, her expertise at communicating innate personality via musical construction being remarkable throughout. Faust appeared last, her alto partnered by Voorand in Brechtian mood, unveiling yet another facet.

There could be no greater contrast than the music presented on the following afternoon by Swedish pianist Jan Lundgren, along with bassman Mattias Svensson and a string quartet. Fellow Swedish pianist Jan Johansson played at the first Tallinn jazzfest in 1966, and this set reflected the contents of Lundgren's recent homage album on the ACT label. Temperamentally, and visually, this ensemble could have been a throwback to the 1970s, choosing a formal, graceful presentation of Johansson's folkloric transformations. The naked source matter arrived from Russia, Hungary and Sweden itself. The strings were employed with restraint, allowing several piano/bass duets, before the violins, viola and cello made their jaunty rhythmic chopping, often filling a percussive role. This was a conservative folk-jazz fusion, but consistently pleasurable in its inevitable plangent smoothness.

Further folk forms were explored on the festival's final afternoon. The local Estonian violinist Maarja Nuut has been developing an increasingly international profile recently, with regular appearances in London and New York. Outwardly, she seems to be reflecting the folkloric sounds of her homeland, but she's involved with drinking in so many other musical sources that the 'folk' is of her own making, often involving original compositions. Her presentation has been further refined, with evocative Northern wasteland images flickering on a large back-screen, the lighting set at low-intrusion dimness, for maximum atmosphere. The subtle opening revealed Nuut's growing skill with looping pedals, softly building up vocal tones, then repeating the process with violin layers. The whole hour or so, steadily consolidated a similar feel, interspersed with tales (this time in Estonian, but she weaves them in English when playing in other lands), in a multi-media experience that didn't draw too much attention to its use of technology, ending up as a decidedly organic experience.

The closing gig involved a new Maria Faust piece, "Velocipede," for an expanded group that had Shitney at its core. On paper, the advance intentions were promising: to address the culture of fitness, not least with several rows of going-nowhere exercise bikes. In the imagination, it was hoped that these would actually generate some of the music, either by direct microphones, electronic transformation, or the simple act of pedalling affecting the musical process. In reality, they just seemed to be lined up for the use of audience members who felt like cycling whilst watching the show, there being an initial uncertainty over whether this was welcomed by the band. It was pleasing to hear, once Faust introduced her repeated vocal pronouncements into the sludgy wash, that she was making an anti-fitness confession, or at least struggling with some form of guilt. But ultimately, nothing was extreme enough to court controversy, either verbally, sonically or visually. Faust's stance and intentions are to be admired, but as with Shitney, the final manifestation was strangely lacking in power and motion.