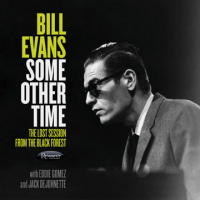 Bill Evans
Some Other Time: the Lost Session From the Black Forest
Resonance
2016

Pianist Bill Evans has never suffered from a lack of musical documentation. A majority of his recordings remain in release and more unheard performances continue to surface. Resonance Records' Some Other Time: the Lost Session From the Black Forest is not the first unreleased Evans in their roster, Live At Art D'Lugoff's Top Of The Gate (2012) preceded it with a complex and mythic performance at a similarly complex and mythic New York City venue. Some Other Time's importance is touted because of the rarity of Evan's trio, here including Jack DeJohnette and Eddie Gomez. This configuration of the Evans trio was short lived, and before now, had only be aurally documented on Bill Evans at the Montreux Jazz Festival (Verve, 1968). This concert was recorded during Evans' appearance June 15, 1968, with these studio recordings being made on June 20. Liner notes author Marc Meyers calls this third of four creative periods, "the percussive poet." To be sure, Evans tempers his introspection of the late 1950s early 1960s with an assertive confidence that manifests in his robust and self-assured finger work. A splendid exercise is comparing these performances with those captured a mere seven years earlier on The Complete Village Vanguard Recordings, 1961 (Riverside, 1961/2005). Everybody digs Bill Evans. 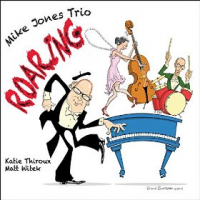 Roaring as in the Roaring '20s. Pianist Mike Jones, music director for the Penn & Teller Show in Las Vegas, has a major jones for the Great American Songbook as evidenced by releases like Mike Jones Stretches Out (Chiaroscuro Records, 2003) and Plays Well With Others (Capri Records 2013). He exists as the newest of a long line of purists that included: Dick Hyman, Dave McKenna, Dick Wellstood, Ralph Sutton, and Art Hodes. Jones has a single peer in Ehud Asherie, a like-minded, full-service pianist with a taste for the old stuff. Roaring is no one-trick-pony, joining Jones is bassist/vocalist Katie Thiroux, whose own Introducing Katie Thiroux (Basskat Records, 2015) made waves. To close the deal, Thiroux's drummer, Matt Witke, joins the fun also. Jones plays with a free, but muscular hand, giving "Yes Sir, That's My Baby," "Mean to Me," and "What'll I do" a new more modern shine. Thiroux is given broad latitude to show off her chops, while Witke keeps time effortlessly. We need Mike Jones to remind us just how good, the "good old days" were. 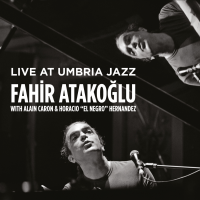 Fahir Atakoğlu is a musical polyglot from Turkey, who is as at home with classical, jazz, and popular music as he is producing tunes for commercials, ambient background, and soundtracks. His recent appearance at the Umbria Jazz Festival was recorded, serving as the source for Live at Unbria Jazz. Atakoğlu's playing can be described as percussive precision, a precision that extend to his careful arrangement of the bass and drum parts. These performances are no mere blowing sessions. They are carefully crafted tone poems delivered with a muscular virility and near scientific exactness. Atakoğlu's nuclear trio is comprised of the time-perfect drummer Horacio "El Negro" Hernandez and the French-Canadian bassist Alain Caron, playing an undulating brand of electric bass that, in sum, makes for a very post-cotemporary sound. The depth and breadth of Atakoğlu art: his composing, arranging, and orchestration is summed up in the disc's coda piece, "Saturday," which alternates between thundering percussiveness, precise fingering, and sumptuous lyricism in the waltz sections. This is true trio music, carefully considered and daringly presented. It possesses its own inevitable momentum and destination. A superb disc. 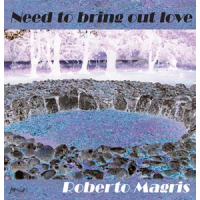 Italian pianist Roberto Magris spent the better part of the last five years immersed in hard bop, with multiple discs devoted to Lee Morgan and Elmo Hope. He teams up with his American trio of bassist Dominique Sanders and drummer Brian Steever. Need to Bring Out Love is Magris' social statement for humility and friendship in the face of ever-increasing world division. He offers here a stimulating mix of originals and standards, vocals and jazz instrumentals that has him stretching to his wide corners capturing his bliss. Joined by singers Julia Haile and Monique Daniell adds a whole new sonic dimension to his oeuvre that finds him both a sensitive and commanding accompanist. In Need to Bring Out Love, Magris follows up his well-received quintet recording Enigmatix (JMood Records, 2015), which was his first non-hard bop related recording in several years. Pared down, Magris reveals his deft hand in the smaller confines of the trio with great skill and insight. As a vocal accompanist, he shines bright with that rare ability to keep up and out of the way of his vocalists. Magris never disappoints, least of all with Need to Bring Out Love. 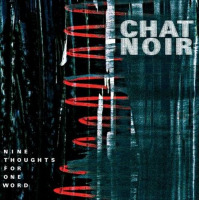 A jazz piano trio recital on Rare Noise Records? It is not unprecedented. Chat Noir's Nine Thoughts for One Word has a title like a Wallace Stevens poem while sporting the tag line: "Re-Imagines the Piano Trio..." This is a bit disingenuous as the music smacks of a wholly satisfying brand of the most ill-behaved ambient electronica. The presence of multi-instrumentalist J. Peter Schwalm, the band's newest member, whose previous, The Beauty Of Disaster (RareNoise, 2016) hit all of the consonant and dissonant notes, brings an electronic depth to the founding members vision. Pianist Michele Cavallari and bassist Luca Fogagnolo crafted five recordings over 12 years. The eight selections making up this recording achieve that sought-after state of being engaged and disengaged at the same time. This is music that can be consumed at any point it is encountered. That is the beauty of it: one can read as much or as little into as one wishes. Guitarist Daniel Calvi contributes some deft lap steel guitar to three selections, providing a further atmospheric note.