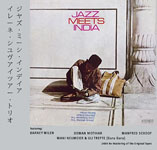 Years before John McLaughlin began a deep investigation into the music of India that resonates to this day, there was Jazz Meets India. It wasn't the first time that Indian music had crept into popular western culture—The Beatles and John Coltrane, amongst others, had already seen to that—but this 1967 MPS date was an early experimental meshing of linear Eastern modality with free jazz improv. There have been plenty of failed cross-cultural experiments, but thanks to Promising Music's ongoing MPS reissue series, this conjoined septet of European improvising trio, traditional Indian classicists and a couple of additional horn players proves an unqualified success.

Comprising only three compositions—two extended pieces and one relatively brief one at just over five minutes—the premise of Jazz Meets India arose when MPS producer Joachim Ernst Berendt asked pianist Irene Schweizer's drummer, Mani Neumeier, if he had any connection with Indian musicians. The drummer had studied with sitarist/tablaist Dewan Motihar a couple years earlier in London, and Motihjar was, himself, a student of Ravi Shankar—already on the ascendancy to international stardom at this time. With Neumeier's insistence of including saxophonist Barney Wilen, and the additional of trumpeter Manfred Schoof, this mix of eastern and western instruments works precisely because, at the core of all three pieces, is a fundamental that's not jazzed up, nor toned down. Instead, both sides moving towards a common middle ground where individual authenticity remains, while creating something fresh and exciting.

The 17-minute "Sun Love," co-written by Motihar and Neumeier, begins steeped in Indian traditionalism, with Kusum Thakur's droning tambura and Motihar's sitar patiently finding their way to a tablaist Keshav Sathe's more defined pulse. Schweizer's trio doesn't enter until after the four-minute mark, but when they do, they're clearly coming from a space heralded by Coltrane—albeit more gently—as Neumeier injects a 6/8 swing over Sathe's longer rhythmic pattern. Bringing a chordal instrument into the mix of this largely linear music could displace it, but instead Schweizer's increasingly active playing respects the piece's inherent modality, drawing on McCoy Tyner for inspiration but going to areas of even freer expressionism. Schoof—whose recently reissued Resonance (ECM, 2009) was nothing short of revelational—plays with equal license, as does Wilen, who adopts a less nasal tone than that of Coltrane's.

"Yaad" provides a brief moment of contemplation, Wilen's saxophone a delicate foil for Motihan's gentle singing, but it's Schoof's closing "Brigach and Ganges" that's Jazz Meets India's greatest success. Starting with Uli Trepte's microtonal-centric bowed bass and some empathic yet lyrical interaction between Schoof and Wilen, over the course of 14 minutes it builds towards the disc's greatest reckless abandon; Neumeier and Scweizer, in particular, playing with unbridled fire matched, perhaps surprisingly, by Motihan.

Neither east nor west, yet redolent of both, Jazz Meets India is an overlooked gem from the MPS catalogue, one that may have seemed more innovative at the time of its release, but which remains engaging nearly 45 years after it was first recorded.