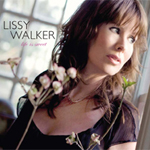 Life Is Sweet is the debut from Berkeley, California-based vocalist Lissy Walker. In an increasingly crowded pool of female jazz singers it's important to stand out from the norm: two things about Life Is Sweet ensure that Walker can do that. Firstly, there is Walker's song selection—a tasteful and unusual mix of standards and more left-field but high quality tunes. Secondly, there's her voice—a subtle but unmistakable hint of country music gives it a distinctive and emotive quality. At times, its fragility suggests a slight lack of confidence—a pity, because Walker has much to feel confident about.

Walker's band helps things along, too. The core quartet is consistently good, while the guest musicians, especially cellist Philip Worman, add just the right touches with their performances. Any singer who records standards from the Great American Songbook needs to bring something new to their interpretations, and the album's opening tune, Johnny Mercer and Victor Schertzinger's "I Remember You," shows that Walker can do just that. The arrangement, by pianist John R Burr, features a delicate trumpet part from Steven Bernstein and propulsive but light drums from Scott Amendola. Walker's vocal hangs back a little, resisting Amendola's invitation to hurry along and, instead, creating a relaxed, almost laidback approach to the melody.

Elsewhere, a distinct country feel pervades many of the tunes, to great effect. When singing about love lost or found, the country music aesthetic of "three chords and the truth" is often ideal, and Walker and her band apply it with great skill. Burr's piano on "How Deep is the Ocean" is a direct descendant of Floyd Cramer, for example, while on Irving Berlin's "What'll I Do?," voice and cello combine in a delightful country waltz.

Walker's left-field choices also include Randy Newman's "Let Me Go" and Ray Davies' (The Kinks) "Celluloid Heroes." In "Days" and "Waterloo Sunset," Davies wrote two of the finest of all pop songs; unfortunately, "Celluloid Heroes" pales in comparison, and the clarity of Walker's vocal only serves to highlight its unconvincing lyrics. Harry Nilsson's "The Moonbeam Song" and Nick Drake's "Saturday Sun" are another story. Walker gets to the heart of both songs, delivering the album's most affecting performances. "The Moonbeam Song" features Jon Evans' lap steel guitar, while "Saturday Sun" sees the quartet joined by saxophonist Dave Ellis and Hammond organist Julie Wolf. Neither song is particularly well-known, but both are inspired choices; the arrangements ensuring that the poignancy of the lyrics is echoed and amplified by the musicians' sensitive performances.

With Life Is Sweet, and with the help of an empathetic and talented band, Lissy Walker imbues her jazz phrasing with a country edge, and establishes herself as a singer to watch—and to listen—for.

I Remember You; How Deep is the Ocean?; Waters of March; What'll I Do?; Let Me Go; Moonbeam Song; More Than You Know; In the Wee Small Hours; isn't This a Lovely Day?; I Wish You Love; Celluloid Heroes; Saturday Sun.