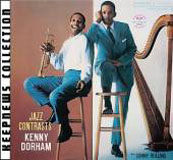 Producer Orrin Keepnews was never one to indulge much in blowing sessions, but this 1957 recording from trumpeter Kenny Dorham comes pretty close. With a lineup featuring Sonny Rollins, Oscar Pettiford, Hank Jones, and Max Roach, why not just give the guys a few standards and turn them loose? Dorham had been recruited for Riverside from a successful stint at Blue Note and Rollins had just completed Saxophone Colossus (Prestige, 1956), so both were eager and ready. The rhythm section was just about the best around.

"Falling In Love With Love kicks off the CD and wouldn't have sounded out of place on one of Miles Davis' Prestige dates, although Dorham was always a warmer and more pillowy player than Davis ever was. "I'll Remember April and "La Villa are fairly straightforward track meets, with all involved contributing the heavy chops that by this time came automatically.

The "contrasts in the title refer to a change in mood at the middle of the album, as harpist Betty Glamman joins in for three tunes. Here role is primarily to provide rich shadings in the background, much like an orchestra, and her presence makes a beautiful ballad like "My Old Flame a little more special.

Gary Giddins has said that Dorham was "virtually synonymous with underrated. He was a reliable player who was content to turn in masterful recordings such as this one. Many jazz fans will have Whistle Stop (Blue Note, 1961), Trompeta Toccata (Blue Note, 1964) or maybe even Quiet Kenny (New Jazz/OJC, 1959) in their collection. Here's another one that deserves a listen.