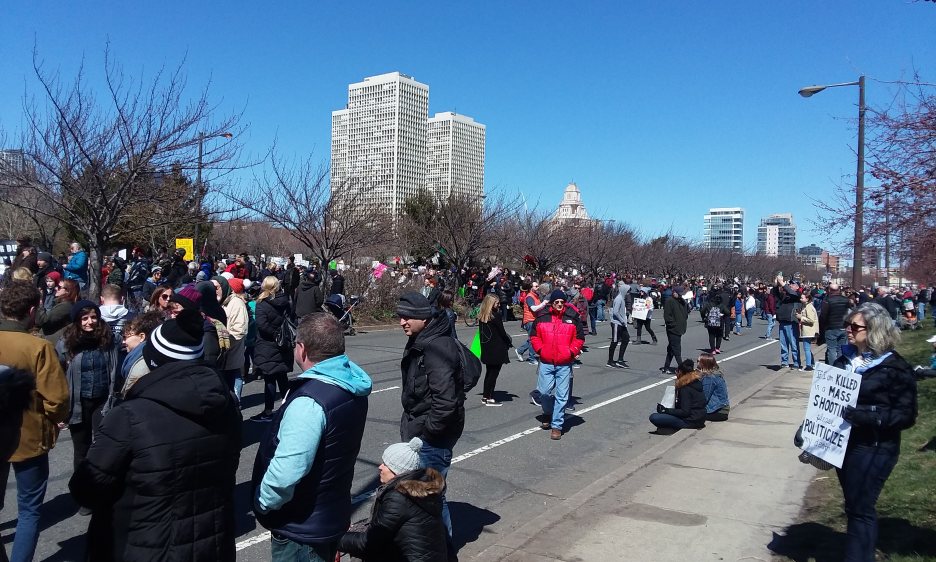 By Victor L. Schermer
March 26, 2018
Sign in to view read count
I just participated in the March 24 "March for Our Lives" event in Philadelphia, one among many cities where the Parkland, Florida Marjory Stoneman Douglas High School shootout led to a large turnout of people advocating for an end to school violence and greater gun control, including, for many, the banning of assault rifles. You may think this violence-preventing effort has nothing to do with jazz, but I think of jazz as an antidote to violence of all kinds, a form of music that might express passions like anger, but transforms these passions into a statement about love and peace. Like a gun, a voice and a musical instrument emit sound, which is an explosion of air that hits the ears. A drum can sound like gunshots, and a saxophone or a trumpet can scream at you. Jazz music and the swing rhythm can paralyze you or lead you to action, just like a rifle shot or a preacher's sermon. The difference is that the mortality rate is much lower for jazz and fervent speech than it is for assault weapons.

I was touched by the initiative of young people towards social change through the enactment of stricter gun laws. For one thing, it reminded me of the social protests I attended during the Civil Rights Movement of the 1950s-60s. Jazz was the music I was listening to then, as now. People came together to change laws, segregation laws that were outmoded and caused harm to many. What could be more outmoded and harmful today than laws which allow easy access to weapons that can kill large numbers of people in a burst of fire power? What could be more worthy than the most vulnerable among us coming together to initiate healing and change that could benefit everyone? This is a fundamental right that we all have, and it is heartening to see that, in a time when people, especially politicians, seem to be all about self-interest, we can band together to advocate for the greater good of all.

Jazz, with its gospel origins, emphasis on freedom, and potential for passionate statement, can be a powerful force for non-violent social action. Words and music are forces at least as strong as guns. Let's hope that our society can return to its roots in reason and love instead of possession and proliferation of assault weapons as ways to preserve individual freedom.