Jayme Stone: Symphonies in a Lightbulb

By Cathy Colman
May 27, 2009
Sign in to view read count
Jayme Stone, banjo player and composer from Canada, recently won the 2009 Juno Award for Best Music Album of the Year for Africa to Appalachia (Self Published, 2008), a collaboration with musicians from Africa. Stone travelled to Africa to trace the roots of banjo and the characteristics of early styles, which haven't yet made it to the Americas.

He also runs a quartet of his own formation—the Jayme Stone Quartet—which performs works of diverse styles, occasionally collaborating with musicians, such as trumpeter Kevin Turcotte and mandolinist Matt Flinner. Stone and his music can be heard almost weekly throughout Canada. He has also toured the United States, where he had a few dozen appearances in both 2007 and 2008. During the second half of October, 2009, Stone will be on his second European tour this year. In the winter of 2009 he performed in the UK, exploring the country from London to Glasgow, following an earlier visit to Spain.

All About Jazz: What made you interested in jazz?

Jayme Stone: I love the spirit of invention, interaction and improvisation in jazz. Those qualities are something I try to bring to all of the music that I play and what I look for in other musicians.

AAJ: Besides banjo, what other instruments have you tried along the way?

JS: I played guitar initially but let it go as soon as I took up the banjo. The quirky physics of the banjo fascinated me and it seemed like there was so much unexplored territory on the instrument. Though I don't play anything else, I am always getting new ideas from studying other instruments, all the while trying to expand the palette and possibilities of the banjo.

AAJ: Does banjo offer you creative ways to explore something new in jazz?

JS: Each of the banjo's unique qualities has the potential to bring something new to a style of music. I love how the timbre of the banjo blends with trumpet for instance. When I played with Kevin Turcotte, we noticed that the trumpet's range goes well below the banjo, so he would often play under me, which is an unusual sound. Trumpet is so often the instrument in jazz that cuts through and now we hear it differently.

The earthiness of banjo and the use of open strings can bring a folksiness and accessibility to more outside jazz harmony. I enjoy using harmonic ideas from jazz to re-imagine folk melodies or turn bluegrass tunes inside out. Bringing different traditions into dialogue is a fascinating process and reveals both the differences and the related underpinnings of each style. 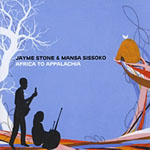 AAJ: Tell me about your latest recordings.

JS: My recent album, Africa to Appalachia, is a collaboration with griot singer and kora player Mansa Sissoko. It's the fruits of my three month research project in Mali, exploring the African routes of the banjo. It just won a Juno Award for Best World Music Album of the Year in Canada. The record before that, The Utmost (Self Published, 2007), features my original compositions straddling roots music and jazz. I brought together musicians from different circles and it has everything from bluegrass-tinged tunes to what I describe as a tiny symphony that takes place inside an imaginary light bulb. The Utmost won the Juno Award for Instrumental Album of the Year in 2008.

AAJ: And what are you working on right now?

JS: I've been learning Swedish folk tunes, transcribing Bach for the banjo and producing an album for guitarist extraordinaire Grant Gordy, who can heard playing with the David Grisman Quintet when he's not out touring with one of my projects.

AAJ: What should we expect from Jayme Stone in the near future?

JS: I am dreaming up a new album that explores music based on dance from across the northern hemisphere: reels, hornpipes, polkas, mazurkas and strathspeys from Sweden, Scotland, France and the Americas. Special guests will include Bruce Molksy, Julie Fowlis and Casey Driessen. Look out for that in summer 2010. In the meantime, I'll be touring the Africa to Appalachia project in Canada, the US and Europe through to the end of this year. There are some dates in the works for the Jayme Stone Quartet and that repertoire will continue to keep evolving. 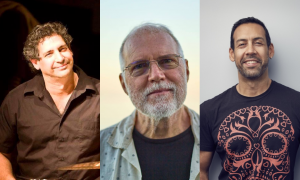 Cathy Colman is a freelance writer and journalist on arts and music from Southern California.