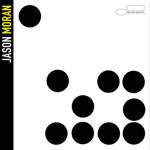 Ten celebrates the ten year life of the Bandwagon, pianist Jason Moran's trio with bassist Tarus Mateen and drummer Nasheet Waits. The piano trio is a mainstay in the jazz tradition, and here the Bandwagon does a characteristically great job of being firmly in that tradition while also blazing a new trail.

"Blue Blocks" starts with a descending motif, planing chords in a gravitational freefall, the hint of a blues turnaround; the piece goes through several styles, using the blues as building blocks. "RFK In The Land Of Apartheid" was written for the film documenting Robert Kennedy's historic visit to South Africa in 1966. The song is built on a wonderful rapid-fire bass motif and has an appropriately cinematic feel (as does so much of Moran's music). "Feedback Pt. 2" mixes some electronic "noise" into the proceedings, subtly and effectively; the track works well in a post-Jimi Hendrix fashion. "Crepuscule With Nellie," the Thelonious Monk gem, is given a wonderful reading, demonstrating the band's amazing elasticity. There is another installment in the ongoing "Gangsterism" series inspired by Jean-Michael Basquiat, this one titled "Gangsterism Over 10 years." "Big Stuff" showcases some Moran pyrotechnics, his connection to Fats Waller and Art Tatum shining through as two fascinating aspects of his playing, demonstrating how capable he is of employing both influences within his overall sound.

Honoring those who have played a big part in Moran's life is part of this anniversary celebration. "Play To Live" was written with mentor/teacher Andrew Hill, who passed away in 2009. "Old Babies" is a tribute to another enormous influence, Moran's two children. "Study #6" is a fascinating and wandering piece by American composer Conlon Nancarrow. "Pas De Deux-Lines Ballet," a gorgeous solo piece written by Moran in collaboration with a dancer, is sandwiched in between. "To Bob Vatel Of Paris" sounds appropriately Parisian. Moran selected it as one of his favorite performances by Jaki Byard, who had a great deal of influence on Jason Moran while teaching him at Manhattan School of Music.

Moran has this to say about "Bob Vatel:"

"This version of 'To Bob Vatel Of Paris' is a favorite piece in my repertoire. I'm not sure who Bob Vatel is, but this is a lovely one on which to hear the unadulterated contemporary stride master. Jaki said his father sat him by the radio one day and said, 'I want you to play like this guy.' 'This guy' was Teddy Wilson. Jaki is big on history, and it's always evident in his sound. I love how his hands seem to roll through the phrases."

There has been a great deal of chatter about "swing" during the late noughties, with heated arguments over who has it and who doesn't, over it's place in new music, and over how to define and codify it. Certainly this is nothing new (as some of Duke Ellington's song titles prove); new vs old, tradition vs rebellion.

Moran, Mateen and Waits swing like mad, and they break new ground. The Bandwagon has covered a lot of territory since its debut outing as a trio, Facing Left (Blue Note, 2000). A sense of joy is evident in every note the group plays. Let's hope we get another 10 years, and see where they take the Bandwagon next. Hop on.

Tracks: Blue Blocks; RFK In The Land Of Apartheid; Feedback Pt.2; Crepuscule With Nellie; Study No.6; Pas De Duex-Lines Ballet; Study No.6; Gangsterism Over 10 Years; Big Stuff; Play To Live; The Subtle One; To Bob Vatel Of Paris; Old Babies.

Blue Blocks; RKF in the Land of Apartheid; Feedback Pt. 2; Crepuscule with Nellie; Study No. 6; Pas de Deux—Lines Ballet; Study No. 6; Gangsterism Over 10 Years; Big Stuff; Play to Live; The Subtle One; To Bob Batel of Paris; Old Babies.