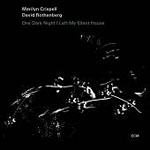 There are those who decry pianist Marilyn Crispell's move towards sparer, introspective free improvisation with Nothing ever was, anyway. Music of Annette Peacock (1997)—the beginning of a now nearly 15-year association with the German ECM label. For those who prefer their spontaneity impressionistic rather than expressionistic, however, it has yielded a relatively small but impressive discography, ranging from trio dates such as the deconstructive Storyteller (2004) to unerringly beautiful solo sets like Vignettes (2008). One Dark Night I Left My Silent House represents a number of firsts for the free-spirited pianist, and is an unequivocal success.

One Dark Night is Crispell's first collaborative album for the label to explore an intimate duo context, and in clarinetist David Rothenberg she has found a partner of sublime depth and intuition. Rothenberg—who has examined the nexus of humanity and nature in CD/Book co-releases including Whale Music (Terra Nova, 2008) and Thousand Mile Song: Whale Music in a Sea of Sound (Basic Books, 2008)—is a like-minded improviser capable of painstaking lyricism and timbral breadth, largely focusing here on bass clarinet. This may be freely improvised music, but his thematic focus—equally matched by Crispell's haunting ability to pull changes out of the ether—lends pieces like the dark-hued "Companion: Silence" a deceptive feeling of preconception where none previously existed.

One Dark Night also represents Crispell's first release for the label where the entire program has been freely improvised, without even the sparest of pre-composed sketches to provide a starting point. Instead, either Rothenberg or Crispell—who spends considerable time playing the piano's soundboard (enough to be credited as such) and, occasionally, introducing hand percussion to the mix in yet another first for her ECM discography—begin alone; their partner sometimes entering almost immediately (the more abstruse "The Hawk And The Mouse"), but elsewhere allowing plenty of time for context to emerge before joining in (the initially majestic, but ultimately more brooding "Stay, Stray").

As beautiful as some of this music is—and pieces like the wistful "Owl Moon" are unequivocally so, with Crispell's evolving arpeggios creating delicate motion over which Rothenberg pointillistic lines hover and sometimes soar—the duo does explore more oblique territory. On "What Birds Sing," Crispell and Rothenberg engage in some surprisingly cogent free play; each one egging the other on, whether it's Crispell's angular intervals or Rothenberg's ululating expressions. But, as always with ECM recordings, the sequencing of the music provides an over-riding arc, where the dissonance and jagged injections of "Grosbeak," "The Way Of Pure Sound" and "Motmot" ultimately resolve with the increasing richness of Rothenberg's bass clarinet tour de force, "Snow Suddenly Stopping Without Notice"—Crispell focusing exclusively on delicate, textural percussion—and, finally, melancholy and tentative optimism on the closing "Evocation."

Few pianists approach the concept of freedom with such unfettered economy. A unique recording in Crispell's overall discography, the aptly titled One Dark Night I Left My Silent House is a unique travelogue with the equally unconstrained but spatially inclined Rothenberg, for whom this ECM debut hopefully represents the beginning of a long-term partnership.

Visit Marilyn Crispell and David Rothenberg on the web.