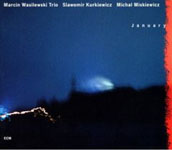 With January, pianist Marcin Wasilewski, bassist Slawomir Kurkiewicz and drummer Michal Miskiewicz step out of the benign shadow of their mentor, trumpeter Tomasz Stanko—on whose Soul Of Things (ECM, 2001), Suspended Night (ECM, 2003) and Lontano (ECM, 2005) they were featured accompanists—and confirm the mighty promise of their international solo debut, Trio (ECM, 2005).

Stanko's absence, felt from time to time on Trio, is noticed no more. On January—an album of warm and glowing lyric beauty which belies any chilly connotations suggested by its title—the trio are complete in themselves.

Appropriately, the disc heralds a re-branding of the group, which now goes by the moniker the Marcin Wasilewski Trio, rather than the egalitarian Simple Acoustic Trio of before. Wasilewski wrote four of the five originals, co-created the fifth, is on-mike in solo or comp-plus mode practically throughout, and is unmistakably the leader.

While Trio was a mixture of eight composed and five freely improvised pieces, there is just one group improv on January (the brief "New York 2007" which closes the set). There are five covers—Gary Peacock's Satie-esque "Vignette," Prince's pretty "Diamonds And Pearls," in which Wasilewski and Kurkiewicz share the melody, Ennio Morricone's "Cinema Paradiso," full of childlike wonder, Carla Bley's "King Korn," which brings a refreshingly acerbic breeze halfway through the disc, and Stanko's gorgeous "Balladyna," given a sumptuous, rubato treatment which (if you're prone to flashbacks) evokes the rippling, trippy, late 1960s astral jazz of saxophonist Pharoah Sanders and pianist/harpist Alice Coltrane more than the work of another piano trio.

In the main understated, regally unhurried, and spacious—qualities which distinguished Trio—January regularly erupts into surging rhythmic intensity, when Kurkiewicz's resonant low-end bass and Miskiewicz's emphatic tympani-sticks on tom toms create waves of propulsion on which Wasilewski can surf. This month of January is a time of pause and reflection, but brings with it too intimations of spring and new growth.

While this lovely music comes out under Wasilewski's name, it is impossible to imagine it being made with any other bassist and drummer, so hard-wired are Kurkiewicz and Miskiewicz into a collective aesthetic. One day, hopefully long off, there may be partings, but until then, MWT are as perfect as it gets.