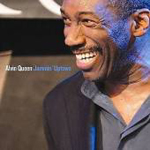 Back in 1985, drummer Alvin Queen put together a band of American musicians to record Jammin' Uptown for his Nilva Records label. Queen, who was living in Europe, visited the United States to play live concerts and to record. This band reflected his vision as he brought together young musicians Terence Blanchard (trumpet) and Robin Eubanks (trombone) along with veterans John Hicks (piano) and Manny Boyd (tenor, alto and soprano sax) with Ray Drummond (bass) as the bridge.

All of the music here is original, with contributions from Blanchard, Boyd, Eubanks, Hicks and Queen. Queen's singular composition is the previously unreleased "Hear Me Drummin," which was recorded in 2001 at the BP Jazz Club in Zagreb. It is the perfect inclusion, for it shows Queen's articulate sense of dynamics and timbre and crystallizes his approach to drumming. He sets up a roll on the toms and edges the snares before venting the rhythm on them. The beat is in a constant state of reinvention, but the rhythm is heady and the grooves irresistible.

The compositions are washed by mainstream jazz but they have an innate strength and character that are enhanced by the arrangements. "Resolution of Love" is a sweeping ballad, warm in its disposition and insightful in its development with Eubanks and Hicks being the prime inventors. Eubanks tonality is clean and full, his ideas coming off in neat sequence. Hicks ripples a whirl of inventions with progressions that are inspired and lyrical.

"Hassan" is driven by a blistering bop trajectory that takes the band into another dimension—one that erupts with erudite intensity. Boyd shoots off reeling phrases, Drummond turns the bass into an earthy adjunct, and Queen brings in an energetic fluidity.