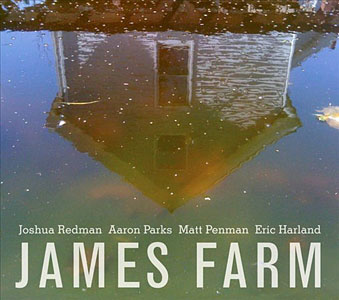 A byproduct of special event programming at jazz festivals is that sometimes lead to greater things. When guitarist Pat Metheny reunited with vibraphonist Gary Burton's mid-'70s quartet as part of his By Invitation series at the 2005 Montreal Jazz Festival, there were no plans to tour the world in subsequent years and release Quartet Live (Concord, 2009). When Joshua Redman pulled together a group of friends for his Montreal series in 2009, its future was unclear. But when the saxophonist reconvened the group for a 2010 summer tour, its new, cryptic name reflected a true collective, with no single member at the helm.

A year later, and James Farm's eponymous debut not only confirms the group's egalitarian nature, but positions this über-quartet of established and rising stars as a clear force with which to be reckoned. Redman, pianist Aaron Parks and bassist Matt Penman each contribute three songs to James Farm, while Eric Harland may only contribute one that, along with Parks' lyrical, folksy "Bijou," represents the album's shortest tracks, but a lot happens in the 4:31 of the drummer's fiery "I-10." A knotty, high velocity theme, over an irregularly metered pulse, leads to Redman's hottest solo of the set, while Parks follows with a brilliantly motivic feature that builds in intensity, only to soar even higher, as the pianist returns briefly to Harland's theme before joining the drummer for a quirky ostinato, driving it to a fever-pitched climax and ending, as Redman's tenor reaches for the stratosphere. It's the closest any acoustic quartet has come to approximating the alt-rock energy of groups like Radiohead.

The rock references continue on Redman's "If By Air," where Parks' introductory blend of Hammond Home Organ and pump organ is redolent of Soft Machine's Third (Sony, 1970)—keyboardist Mike Ratledge's "Out-Bloody-Rageous," specifically—but once the band enters it's back to an all-acoustic environs, with a prismatic solo from Penman who, like Harland, solos less frequently than Parks and Redman, but is no less distinctive for it, or equal in his relevancy to James Farm's sounds.

The quartet's inherent chemistry comes from multiple cross-pollinations of its members, most notably Parks, Harland and Penman as the core of the pianist's stellar Invisible Cinema (Blue Note, 2008), and Redman, Penman and Harland's work with SFJAZZ Collective, from 2005-2007, a context that encouraged the bassist and drummer to hone their compositional chops to the same level as their already well-established partner.

Whether it's on Penman's foreboding, arpeggio-driven but ultimately tumultuous "Coax," Parks' polyrhythmic, Middle Eastern-tinged "Chronos," or Redman's initially balladic but gradually accelerating "Star Crossed," the interaction is at a mitochondrial level, with an attention to melody and song, even when the context is more challenging. A group of four leaders—Redman the senior, but Harland's recent incendiary debut, Voyager—Live By Night (Space Time, 2010), no less accomplished—could be a recipe for disaster, as James Farm deflects everyone from their own work. But with a collective this vital, there are few who won't be prepared to allow its members to hang around a little longer together, before returning to their individual, equally ascendant careers.